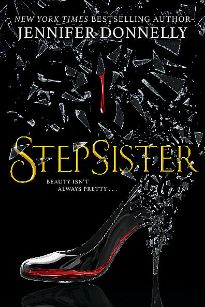 Stepsister is the latest “fractured fairytale” I’ve read, and there have been many over the years – some pedestrian, some relying only on a single concept, but some brilliant and insightful. Donnelly’s contribution falls squarely in the latter category. It’s based on “Cinderella,” and it takes place after the happy ending, from the viewpoint of one of the Ugly Stepsisters. Ella has gone off to live with her prince in the castle (and they have since become King and Queen of France), and the stepsisters and their mother live in a decaying mansion (Maison Douleur, “House of Pain”) with no money and certainly no social prospects, as they are widely reviled as the ones who heaped so much misery upon sweet, lovely Ella.

Of course, there’s more to the story. That’s only the set-up. Although Maman is very much the scheming match-maker of the popular tale, Octavia and Isabelle (the viewpoint character) are anything but the self-absorbed, selfish creatures we have come to despise. Neither particularly wanted to get married, let alone to a prince. Tavi lived for science and mathematics, while Isabelle was devoted to heroic adventure, military strategy, and her favorite horse (at least, before Maman embarked upon her marriage schemes). Even after Ella goes off to her happy ending, Isabelle’s fate is not their own. Literally, because the incarnations of Chance and Fate have a wager as to whether she can overcome the harshness of her present circumstances, or whether she and her family will fall prey to the invading armies of the evil General Volkmar. In the end, it’s up to Isabelle, with her keen wit and her capacity for growth (and remorse) to thwart the bloodbath and save Queen Ella’s throne.

The characters are wonderful, the details whimsical and grim, the emotional arc pitch-perfect, and luscious prose like this:

“The pieces of your heart are restored. The boy is love – constant and true. The horse, courage – wild and untamed. Your stepsister is your conscience – kind and compassionate. Know that you are a warrior, Isabelle, and that a true warrior carries love, courage, and her conscience into battle, as surely as she carries her sword.”

I’ll be re-reading this one. Highly recommended.