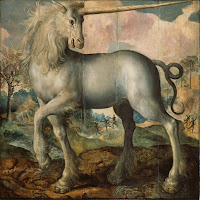 This week's treat for you is a free short story in Curious Fictions. While you're there, I hope you'll subscribe or check out my other posted work.


When the young wizard journeys into the mountains to find her totem spirit, she little dreams of the twisted fate that would exchange her own soul with that of the winged unicorn.
Totem Night
The night was darker than she expected. Darker and colder. Frostmist haloed the stars. As she pulled her sheepswool ruach’ tight around her shoulders, Xiera wished, not for the first time, that she’d paid as much attention to her weaving as to her wizardry.
She had traveled, alone and unarmed, from Choa’tlexa at the edge of the Harvest Plains and into the barren mountains of Hua’tha’s Curse. At the fifth setting of Choa’tl’s Eye, she came across the circle of fallen stones. When she touched one, a spark crackled, stinging her hand. Her fingertips came away, covered in acrid dust. She sat cross-legged in the center of the circle and composed herself.
It will come, she reminded herself. My totem will come to me. Everything so far had been exactly as her teachers foretold, the journey to Hua’tha’s Curse, the moonless night, this place of power.
Moments crept by, bleeding into one another. The earth shivered, so light a ripple that she might not have noticed if she hadn’t been sitting so still. It was the third tremor that hour, each one raising it own false hope.
A speck of silver winked along the western ridge. Heartbeats followed one another. The mote of light elongated into a circle, quickly followed by the second moonlet.
“The Kiss of the Twins,” a man’s voice spoke from the night, velvet-smooth. Darkness masked his face, as coppery as her own. She’d never known a life without him, from her earliest memories of following, playing and fighting with him and his brothers, sleeping on the mounded carpets of the children’s tent, curled together like puppies.
Only later, as her wizardry stirred and her body changed, so did Xiera’s feelings for him, and his for her. She wept when the elders sent her to Choa’tlexa with its towers, stepped pyramidal temples and markets, as priests, traders, artisans and wizards bustled along the narrow stone streets. She wept again when Tl’al followed her three years later. His beauty burned as sharp as the sun, as did the answering fire within her. That was the last time she had wept, for wizardry kills tears.
Posted by Deborah J. Ross at 1:00 AM