Here's a first peek at the cover by Dave Smeds. This volume, edited by Elisabeth Waters, includes my story, "Sage Mountain," which I describe as Buddhist sword'n'sorcery. With trolls. And a dragon. You can read a snippet here.

It's July in the garden!

It's been a while since I've posted about the state of our garden. We have about 1/3 acre, much of which is under cultivation. Our orchard consists of 2 pear trees, 2 apple trees (one with 5 different varieties grafted on), an an enormous grapefruit tree that survives the winters in the micro-climate created by one of our beautiful old California oaks. For a number of years, we tried a vineyard (Syrah grapes, which like this climate) but neighboring redwood trees cast too much morning shade so the Brix (sugar content) was never high enough for decent wine. Last year, we dug up and gave away the last of the vines to friends with sunnier plots. The old cordons are excellent for pole beans, small climbing squashes (like Delicata), cucumbers, and the like.

My husband has become enamored of the idea of "feral gardening," so many of our plants are naturalized. Chard has sprouted in a number of places; it's happiest right now at one end of the old vineyard, where the aforementioned shade provides a cooler environment during hot summer days. Purslane, amaranth, and arugula run rampant everywhere. And we will never, ever get rid of the tomatillos we were so imprudent to plant five or six years ago. (You need two to produce fruit and the result is hundreds and hundreds of seeds.) The asparagus is migrating through the lavender, which has returned the favor by invading the asparagus patch. Along the fence separating the apple and pear trees from the alley plot, volunteer scarlet runner beans are going gangbusters. I fully expect to find lacinato kale coming up in odd corners.


In July, the asparagus is done for the year, as is the rhubarb, but we sometimes get a second season in the fall. Last year, the grapefruits ripened in the fall instead of winter, and from the softness of the fruits, this year may be the same.

This summer we planted a bunch of summer and winter squashes, as this is a vegetable family that doesn't play havoc with my husband's digestion. One zucchini was nibbled by wood rats, and Dave is hard at work trying to trap them with peanut butter. If the gods shine upon us, we will have corn, tomatoes, and cucumbers. Lots of pole beans, as they freeze exceptionally well. Our favorite variety is Emerite, prolific, long-seasoned, delicious.

Around the back, we have a small raspberry patch, more squashes and pole beans, some potato plants that refuse to die, gooseberries (make amazing jam), and four heat-tolerant blueberry bushes that took a while to get going but are now exuberant. Here and there, I see a few parsnips that might be harvestable after the first frost (more feral gardening -- the seeds scatter everywhere).

I keep forgetting about the herbs: an enormous catnip patch, pineapple sage, tarragon, oregano, mint. You never get rid of mint, so you might as well eat it.

Email ThisBlogThis!Share to TwitterShare to FacebookShare to Pinterest
Labels: gardening

Lovely friends, the folks at DAW just sent me some dust jackets for the hardcover edition of Thunderlord. The book won't be released until August 2, but I know some of you can hardly wait. So I have 6 of these covers, autographed. I'll give them out in order requested.

If you'd like one, email me through the "Contact Me" button with your mailing address. (And if you want it inscribed.) I'll pay postage in the Continental US, and we can negotiate overseas costs -- and if you felt moved to reimburse me, entirely up to you, you can do that through the "Donate" button.) 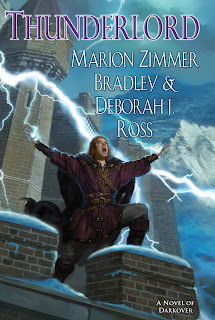