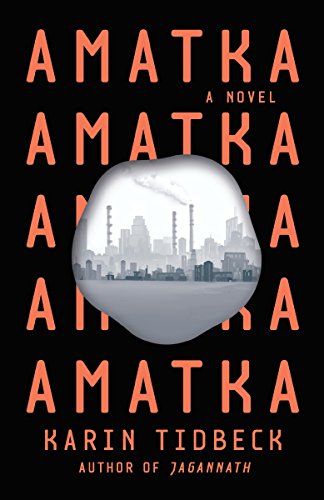 Book description: “Vanja, an information assistant, is sent to the austere, wintry colony of Amatka to collect marketing information. Intending to stay just a short while, she falls in love with her housemate and prolongs her visit. But when she stumbles on evidence of a growing threat to the colony and a cover-up by its administration, she embarks on an investigation that puts her at tremendous risk.”

Told through deceptively simple prose, Karin Tidbeck’s Amatka depicts a world chillingly reminiscent of George Orwell’s 1984. Layers of bureaucracy and social conditioning create the illusion of a happy community, while despair, disease, and alienation produce attrition and threaten the city’s survival. Social and psychological disintegration parallel the breakdown of the physical environment. Objects large and small must be constantly marked with written labels or names spoken aloud or they break down into amorphous goo.

The use of language in creating and maintaining reality is one of the more creative I’ve seen. I admired how Tidbeck introduces her world with very little explanation, using subtle clues layered into the otherwise prosaic action. For most of the book, I had a pretty good idea of what was going on: the mutable nature of matter, the increasing suppression of dissent, the enforcement of conformity, and the inexorable loss of history. I was curious about how humans had come to live in a world in which the basic rules of physics were so plastic and what the underground resistance was about, but I was also confident that the answers would be made clear.

The publisher describes this book as, “A surreal debut novel set in a world shaped by language in the tradition of Margaret Atwood and Ursula K. Le Guin.” The only part of this description I agree (other than “debut”) with is “surreal.” Atwood and Le Guin created imaginative, provocative stories, but their work is accessible to most readers. There’s a difference between being mysterious and mystifying. As I waited for the answers to the many questions Tidbeck raised, she piled mystifying upon mystifying until I had no idea what exactly Vanja was discovering (other than that the commune was re-using stable “good” paper for announcements).

The book ends with Vanja acting in an erratic, destructive manner, setting fire to the records she previously treasured, and then being lobotomized so that when she’s freed, she no longer possessed the speech that would allow her to re-shape the world as part of the resistance. I don’t mind grimness, but such a downer puts Amatka squarely in the 1984 camp. This could have been such a cool book, too, with a denouement that made all the sacrifices worth it. After earning my trust as a reader, Tidbeck dropped the ball royally. I doubt I’ll pick up anything of hers in the future. To be fair, however, I don’t think the disappointing ending is entirely Tidbeck’s fault; it’s what happens when pretentious literary editors take on genre projects.

Support Borderlands Books, an indie bookstore, and get a hardcover copy of The Laran Gambit with a bookplate autographed by me. Link here.

Email ThisBlogThis!Share to TwitterShare to FacebookShare to Pinterest
Labels: bookstores 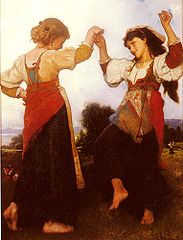 My older daughter, Sarah, currently a college student, earned praise for her essay on the leadership role of women. With her permission and no small measure of pride, I share it with you.

The assignment was: Some theorists have suggested that the world would be a much better place to live (i.e., fewer conflicts, wars) if women held all the positions of leadership. Do you agree? Why or why not? Do women in positions of power tend to behave in more stereotypically female (caring, nurturing) or male (aggressive, dominant) ways?

Would the world be better off if it was run by women?  This deceptively simple question is best broken down into components: Are individual women better leaders than individual men?  Does the culture of leadership drive women in positions of power to behave in stereotypically male ways?  And, What is the effect when the majority of leaders in the legislative space are female?

The first two sub-questions are related.  Are individual women superior leaders?  Perhaps not, because for every Jacinda Ardern or Angela Merkel there may be a Margaret Thatcher or Marine Le Pen.  Perhaps the character traits expected by the electorate, and the strategies employed by powerful women to attain and defend their status, weeds out individuals who behave in a cooperative, nurturing manner.  It is quite plausible that the culture of power, or the traits demanded of leaders regardless of gender, is so pervasive that the theoretical advantages of female leadership are eliminated.  What does the data show?

A Forbes analysis indicated, and an academic analysis later confirmed, that the countries which fared best during the pandemic were led by women: Germany, Taiwan, New Zealand, Iceland, Finland, Norway and Denmark all took the pandemic seriously and took early steps to safeguard health.  This association has been found to be systematic among a sample of 194 countries (Garikipati & Kambhampati, 2020).  Iceland’s Prime Minister Katrín Jakobsdóttir instituted free testing, while Taiwan’s Tsai Ing-wen instituted 124 pandemic-curbing measures early, in January of 2020, and by April were sending face masks abroad.  Their success is punctuated by the expression of traditionally feminine traits: Norway’s Prime Minister Erna Solberg went on live television to reassure children that it was okay to feel scared.  Just try to catch a strong-man leader such as Bolsonaro or Putin doing that! (Wittenberg-Cox, 2020) 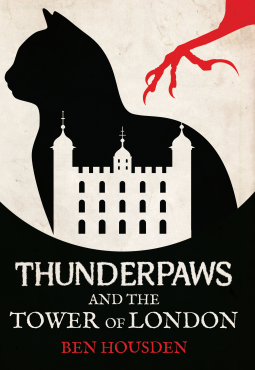 When Teufel the cat (who hates his nickname, “Thunderpaws”) moves into the Tower of London with his chaplain owner, he is less than thrilled. The trip itself, including being sedated and transported, was bad enough, but now he finds the new rules insufferable: no doing his business on the lawn, no wandering at all hours, and no chasing the sacred ravens. Teufel is a Cat of Attitude, snark being primary among them, and he is not about to play nicely or restrain his innate Cat Nature. In his attempts to exercise his feline right to kill small prey and anything with wings, he encounters a mystical mouse, a couple of ghostly cats, and the deceased spirits of humans who have died in the Tower. Queen Anne, Lady Jane Grey, and Sir Walter Raleigh are bad enough, with Anne planning to destroy the internet. But when King Richard III and Guy Fawkes hatch a plot to take over London (and the world), Teufel is drawn in to a maze of dark schemes and darker magic. As it turns out, he’s not nearly as savvy as he thinks he is.

Among the many delights of the book are Teufel’s sarcastic voice, details about the ghosts, and the army of lady rats led by a giant rat named Elvis. I wish there had been more exploration of how Teufel changes with his misadventures, especially those that were his own fault. It was a good thing I read the book on my Kindle, because quite a number of references that would have been obvious to Londoners escaped this Californian at first.

My only real issue, however, was the extended epilogue. It’s one thing to set up a sequel, but to go on at length detracts from the satisfaction of defeating the agents of evil and then taking a break. Sequels, as opposed to books in a single multi-volume story arc, run the risk of being episodic, especially when the beginning of the next is inserted into the end of the first, thereby making it not a true end at all.

Despite my quibble about the epilog, this book should have special appeal to cat fanciers (and perhaps Londoners). The illustrations are particularly wonderful.

In case your dessert wasn't rich enough, here's a delectation to top it with. It's incredibly sweet and rich, compared to ordinary whipped cream. This recipe comes from my first mother-in-law and I believe it had been in her family for several generations. This version is in my (then teenaged) daughter's handwriting and is transcribed as written. See the note below.

Cook flour and milk into a THICK paste.

When paste is body temp, combine with butter and sugar.

Beat on high speed until sugar granules are gone. Add in vanilla and beat until mixed.

*It is not clear to me whether this means sweetened condensed milk or unsweetened evaporated milk, although I suspect it's the former. If you prepare this recipe, please let me know which you used and how it turned out.