My husband is a great reader, I might say a voracious and omnivorous reader. He reads widely across genre lines and nonfiction. Part of his dowry was 70 cartons of books, so of course we had to build a freestanding library shed to house part of our combined collection. Needless to say, our tastes are not identical. So here are a few books that didn’t work completely for me but did for him. All of them are High Concept, chock full of imagination. You might like them, too.

Kim Stanley Robinson, The Memory of Whiteness. Robinson is a superlative writer, no question about it, and I have enjoyed his other work. This one is set in the far future, when revolutionary breakthroughs in have allowed humans to colonize the entire solar system by creating miniature suns and corresponding dome habitats. The physicist responsible for these transformations also made connections between mathematics and music, and created an all-in-one one-of-a-kind Orchestra. The current Master of the Orchestra and his entourage embark upon a concert tour of the system, and various, increasingly ominous shenanigans ensue. I loved that the folks living on Pluto were crazy about music, everyone played multiple instruments, and the entire planet went nuts about each performance. (One of our characters is a tapir farmer from a world circling Uranus, a member of an amateur music review club who gets sent as a journalist to follow the Orchestra tour.) While brimming with innovation and luscious descriptions of music and its power to define and transport us, I found the long expository passages, such as explanations of the state of relativity theory and its relationship to music, repetitious after a time. My husband loved them.

The Long Earth by Terry Pratchett and Stephen Baxter opened with everything going for it. I love

parallel Earth stories, and these two authors are masters of their craft. The twist here is that the further you get from “our” Earth, the less the worlds have in common. New frontiers, new pioneers bringing only what they can carry. And something dark and dreadful moving through the outer worlds… The story had me firmly in its page-turning clutches until the not-quite satisfying end. I learned later that it’s the first of series. I’ll likely take a look at subsequent volumes if my public library has them. I do, however, feel a bit piqued by a series opener masquerading as a stand-alone. But not all the time. Sometimes it works just fine for me.  The rest of the book, however, was just grand and my husband enjoyed it, so I chalk this up to individual quirk. The longer the time since I read this book, the better I think of it, so I am inclined to give it another read. Maybe this time, when I already know what happens, I will be able to submerge myself in the journey.

Gospel by Wilton Barnhardt came to me from a friend, who stopped reading it about halfway through. It’s a long book, almost 800 pages, and in hardback, so that made it heavy and somewhat difficult for my arthritic hands to manage. It’s a zesty combination of present-day narrative, quotes from a lost Biblical gospel, and academic-style footnotes and references. The opening, where the existence of the gospel is revealed and the search begins, all amid contentious scholarly discussions, caught me up. Various nefarious cults, also after the gospel, add a nice degree of tension. God interjects comments here and there, some of them hilarious; sometimes the characters listen but at other times they are infuriatingly oblivious. But about 2/3 through, I found myself looking around for something else to read. The shine of the concept had dimmed and there wasn’t enough in the characters or action to hold me. I kept wondering what this chapter or that sequence had to do with The Hunt. My (extremely limited) interest in early Christianity had been exhausted. I thought my husband would enjoy the book, and I was right. It held his attention all the way through, with continued delight in the (accurate) footnotes.
Posted by Deborah J. Ross at 11:29 AM No comments:

The redwoods have been getting their fair share of the rain, and I’ve been holed up with a pile of wonderful books. Some of these came from my gigantic “To Be Read” bookshelf and others fall under the category of newly-purchased series addiction indulgences.

A Plague of Angels by Sherri S. Tepper was a thrift store discovery.  Someone must have donated their collection of tattered, dog-eared 1990s science fiction to swell the fare that I’ve already picked through. For me, Tepper is a sure bet and I was pretty sure I didn’t have this one. That’s one of the problems of thrift store offerings, especially since my husband’s dowry included 70 cartons of books, much of it science fiction. Despite the cover images (couple on white horse, undoubtedly fleeing something; dragons in the sky and ruined castles on the hilltops), this is not fantasy. It begins like fantasy, with an Orphan growing up in an archetypal village where everyone has a designated role: Oracle, Thief, Hero, etc. Tepper’s world is much bigger than the village, and by the time our characters arrived at the Place of Power, I’d recognized genetic engineering, an analog of AIDS, the remnants of scientific institutions (the families Mitty and Berkli), ecologists on a multi-generational mission to restore habitats, and cyborgs gone seriously postal. Great stuff, wildly inventive.

Chapelwood by Cherie Priest continues (and supposedly concludes) the adventures of Lizzie Borden, she of the axe and the forty whacks that saved the world because Chthulu, and if you haven’t read Maplecroft, I won’t give away any more. As enchanted as I was by Lizzie, I found Chapelwood a bit of a letdown. Mind you, Maplecroft was a tough act to follow, with its exuberantly creepy mix of Lovecraft and American history. Still, despite the lesser originality of the concept, Priest’s deft storytelling kept me turning the pages. I definitely would not begin with this one, however. Start with Maplecroft and if you adore it, treat yourself to Round 2.

More of Charlaine Harris’s Sookie Stackhouse. Dead Reckoning, to be precise. That’s the one that begins with the firebombing on Merlotte’s. I think this is #11 of 13 and I’ll be sorry to see the end of Sookie’s world. I love how she cleans house when she needs to think. But once I have read them all, I will always have the option of binge-reading the whole shebang.

Likewise, two more “Laundry Files” novels by the inimitable Charles Stross. A delicious and often hilarious cross between James Bond, computer geeks, and the Chthulu mythos. It turns out that any sufficiently advanced mathematics is not only indistinguishable from magic, it is magic. And if you spent too much time contemplating certain theorems, things with glowing, writhing tentacles start inhabiting your brain. Like other series, these books are best not begun in the middle. However, I grabbed The Rhesus Chart (“everybody knows vampires aren’t real”) and The Fuller Memorandum (you really don’t want an Eater of Souls munching through the population of England) and read them in the wrong order, also skipping the one in between. Since I’d read the first ones, I wasn’t lost in terms of characters and world-building, just events. These two were vastly amusing nonetheless and someday I’ll pull a Sookie Stackhouse and read them all back to back and in the correct order. Who knows what otherdimensional horror that act of folly will unleash. Just kidding, really.

Last but by far not least – and I cringe to admit it – I finally sat down to read Naomi Novik’s “Temeraire” books (the last one of which has yet to be released). Herein is a perfect example of bouncing off a book too far into a series. I attempted number 5 or 6, somewhere in there . I couldn’t figure out who the characters were, why I should care, and what was going on. Hoo, I thought, another Jane Austen – or in this case, C. S. Forester/Patrick O’Brien – mashup. But I dutifully opened the complimentary copy of the first volume, His Majesty’s Dragon, that came to me in a goodie bag at World Fantasy Con. I read at least the first pages of freebie books. Oh, all right, the first few words. Wow, I thought as the chapters sped by, this is corking good! And they are, really. I feel like a dolt for having taken so long and for having discounted all the praise as dragonmania. Novik has a light, sure touch with both characters and action. She never beats the reader over the head with the niftiness of her High Concept, and her handling of relationships is beautifully executed. As it turned out, my older daughter had just moved in with us, bringing her collection of Temeraire’s adventures. We passed them around, my husband and I reading them for the first time, Sarah for the 3rd, I think, and then we gave Sarah the last two volumes in print for a birthday present. The entire household awaits the final volume with bated breath. As for me, I have added Novik to the list of authors I will follow across genres. I look forward to the delights as she continues to mature as an author. Fame well earned!

The Tajji Diaries: Pigs and Pups 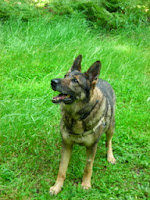 The Story So Far: about two years ago, we adopted a retired seeing eye dog, a German Shepherd Dog named Tajji. She had significant reactivity to other dogs when on a leash, which we have been steadily working on with the help of positive techniques trainer Sandi Pensinger of Living WithDogs. Tajji has made enormous progress in learning a new skill set, including making eye contact with her handler and playing fetch. She is much better at greeting people politely and is unusually gregarious for her (notoriously aloof) breed.

The last few months have brought a couple of new developments to her life. We had heard from her previous owners that she enjoyed dog parks, which did not fit with what we observed in her on-leash behavior. A couple of incidents in which we watched her interact with other dogs off-leash convinced us that she has excellent bite inhibition and not-so-bad social skills with other dogs. So we decided to give it a try. On her first visit, upon leaving her car crate, she went into her usual barking and lunging routine, but as soon as we approached the gate, she quieted down. You could see the memories dropping into place.

We’d heard horror stories about dog parks, with inappropriate behavior on the part of both dogs and owners, so we watched Tajji carefully. This particular dog park is quite generous in size, divided into areas for small and large dogs, with water bowls and chairs for owners to sit. There’s a small “airlock” fenced area between the parking lot and the gates to the two sides. The surface is mostly wood chips and the area is kept quite clean (except for assorted tennis balls, rope pull toys, and an occasional stick).
Read more »
Posted by Deborah J. Ross at 1:00 AM No comments: