The Guns Above, by Robin Bennis (Tor)

Just wonderful! This steampunk military drama incorporates brilliantly realized airship technology, with the same level of loving detail and respect for the resourcefulness of the people on those ships as found in Patrick O’Brien’s novels, with international intrigue, military maneuvers and derring-do.

Josette Dupre, one of the few women aviators in a made-up European country, became captain of her own airship almost by accident by being the highest-ranking surviving officer after a disastrous battle. Her troubles are only beginning, though, for she is sent on patrol with a crew that doubts her abilities, an experimental airship that is likely a death trap, and a dandified observer with a secret mission to prove women have no place in the air corps.

Josette has a complex, appealing blend of confidence based on experience, keen common sense, bravery, and self-doubt. The book is nicely paced, full of exciting twists, and intriguing technology. As with the O’Brien books, I was struck by the level of scientific, engineering, and mathematical knowledge of the airmen. I’m not a military buff, but I found the action engrossing and the characters appealing. The sly humor, aimed mostly at the dandified aristocracy, added a wonderful touch. I found the geography and political history of the various fictional countries unnecessary and confusing at first, detracting from the dramatic action, and would have preferred closer parallels with existing European states. Otherwise, this was a fun, lively, and ultimately satisfying read.
Posted by Deborah J. Ross at 1:00 AM No comments: 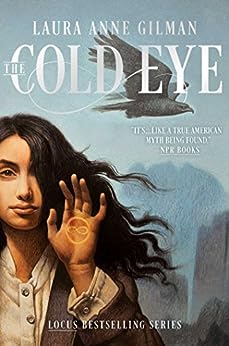 I loved Gilman’s take on “the Weird Wild West” since I read the first volume of this series Silver on the Road). In this world, the Devil presides over “The Territory” (roughly the southwest of the present US), imposing order and protecting the land and its inhabitants from both chaotic magic and incursions of Americans bent on the kind of exploitation and industrialization that has in our world destroyed so much wilderness. Needless to say, he isn’t what we’d think of as evil, but he is powerful and mysterious.

Young Isobel has grown up in Flood, the Devil’s headquarters, and in the first volume has embarked upon a life on the road as his Left Hand, a sort of one-woman magical police force, along with her trail mentor, Gabriel. They had various exciting adventures, some involving magicians that were once human but through their craving for magical power have become something else.

Now, in The Cold Eye, new challenges greet them, beginning with a series of unexplained earthquakes, the appearance of supernatural animals bearing enigmatic warnings, and a host of fascinating but questionable characters. This second volume is not “more of the same,” however. Gilman takes the story up a notch by delving into the very nature of magic, something Isobel is steeped in but does not yet understand. As Isobel gradually comes to realize that she is more than an ordinary human chosen for an extraordinary mission, we ourselves as readers are brought into a world of experiences beyond our own, deftly portrayed by Gilman’s consummate skill as an author. The journey is fascinating, baffling, exhilarating, and fearsome; more than that, it left me wanting more.
Posted by Deborah J. Ross at 1:00 AM No comments: 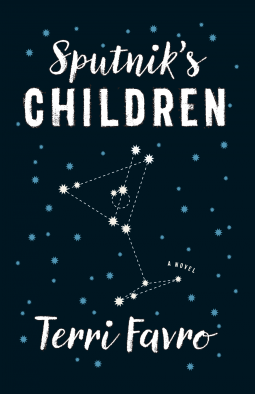 The initial premise of this novel is an appealing one: the woman creator of the raunchy, underground-style superhero comic, Sputnik Girl, may actually be the heroine of her own story, transported from an alternate world. The operant word is “may” because Debbie Reynolds Biondi is so befuddled with tranquilizers, booze, and casual sex, she’s anything but a reliable narrator.

As the story unfolds, it simultaneously wanders from that premise as the true history of Sputnik Girl is revealed. Cataclysmic events like the testing and deployment of atomic bombs have fractured off alternative, parallel worlds from our own. In Atomic Mean Time, Debbie, her family, and friends, live in a polluted, increasingly totalitarian world that is careening toward thermonuclear catastrophe. As Earth Mean Time Debbie delves ever deeper into Sputnik Girl’s origin story, her own history unfolds.

Touches of humor abound, as do dark moments. The parallel-but-different details (like Richard Nixon committing suicide in Atomic Mean Time, but the Beatles were just as popular) were well done, but personal events like Debbie being molested as an adolescent didn’t play out emotionally as believably.

In the end, Sputnik Girl is rendered irrelevant to her own story. It’s not about finding the grit to transcend the horror of a dystopian, heart-breakingly unjust world, the way a superhero origin story works, but about sacrificing your own comfort and happiness for a greater good and then proceeding on to a rootless, emotionally numb life when no one but you remembers. I think the key to my dissatisfaction lies in the absence of grappling with personal trauma in the midst of a global tragedy. For me, the mirroring of internal and external struggle give a story resonance. That objection aside, the book moves along briskly, with nuggets of delight and despair interspersed with plot twists. Others may not feel as I do, and will enjoy without reservation this nicely paced, slyly humorous atomic tale.
Posted by Deborah J. Ross at 1:00 AM No comments: 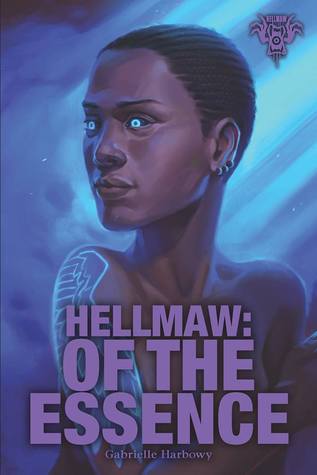 In the Hellmaw series, a war in the daemon land Araunt has left exiles stranded on Earth, some at perpetual war with one another and other desperate to return to their homeland. This novel, set in contemporary London, features tattoo artist Quills who collects magical "essence" as she inks designs onto humans and fellow daemons alike. That’s all the backstory you need to enjoy this delicately nuanced, suspenseful urban fantasy. Despite being labeled Hellmaw 7, it’s easily a stand-alone. The narrative was strong and clear, the characters memorable, and the mystery and its resolution provided enough twists and turns to keep me turning the pages late at night.
The leader of one of the daemon factions has been killed, and the crime is going to be pinned on Quills unless she can discover who really did it. I especially loved that although Quills can assume any shape, she prefers the dark skin favored by her grandmother. Added to this are the natural color of her luminous blue eyes and the way her own tattoos can glow. And move. My all-time favorite tattoo is a wing that, when properly positioned on her body, can fan open to reveal a secret carrying place (in which she stores essences taken from other daemons).
I also loved the historical flashbacks that poignantly illustrated how Quills has been changed by her contact with humans, shaping her contemporary relationship with her human companion, AJ. Besides its aspects as a thriller, it’s a tender romance and story of letting go and truly becoming your own person. Hellmaw: Of the Essence is a satisfying read on many levels and marks Harbowy a talent to watch out for.
Posted by Deborah J. Ross at 1:00 AM No comments:

Okay, we've all heard the warnings. In summer squash season, do not leave the window of your parked car down or you will find a 20 lb zucchini on the passenger seat. And every year we (as do many others) suffer a memory lapse and plant -- well, too many squash plants. (This applies only to summer squashes like zucchini, pattypan, and crookneck; winter squashes like butternut, buttercup, and acorn aren't a problem because they can be stored and enjoyed over the course of months.) However, we have devised several strategies for dealing the the bounty that do not involve breaking and entering our neighbors' vehicles.

The first strategy is the careful selection of summer squashes. Most varieties, like ordinary zucchini, become woody once they pass a certain size. The seeds get large and tough. You can cut around the seed area and use slabs for zucchini lasagna or brush with olive oil and slap them on the grill. But really, how much zucchini lasagna can you eat? We found a variety, romanesco zucchini, that stays tender (and small-seeded) even when it attains considerable size. It's a delicious squash with a sweet, nutty flavor. Here's what it looks like on the vine. This squash is about 18" long.

We usually pick them at this size or smaller, but occasionally, one hides from us...

What to do with such an edifice of squashness? Strategy Two of the squash abatement program is to chop it fairly small and freeze it for winter. No summer squash tolerates freezing well enough to eat plain, but the small cubes go beautifully in pasta sauces and soups. The first step is to wash and slice it. You can see why we call it "steampunk squash." The seed cavity is really just a spongy central area, and the seeds are tender.


Typical instructions for home freezing call for blanching in a hot water bath, then plunging into ice water. Clearly, those folks have never heard of modern appliances. My short-cut is to microwave the cubes until they are just steaming but not cooked, then quickly seal them in freezer bags and pop them in the freezer. Here are pint-sized bags ready to go into the big chest freezer. The monster squash yielded 7 pints.

Email ThisBlogThis!Share to TwitterShare to FacebookShare to Pinterest
Labels: food preservation, gardening, summer squash, what to do with zucchini

Hot Jupiters and Other Wonders

Exo-planetary discoveries abound in current popular and technical astronomical literature. Authors throw around terms like "hot Jupiters," "ice giants," and "brown dwarfs," (of course, the fantasy lovers among us imagine something quite different when we read the latter two terms), often assuming their readers (a) have read articles in which those and many other, related terms were defined; and (b) remember those definitions. With the number and types of newly-discovered planets circling stars other than the Sun increasing in leaps and bounds, how is an interested lay person to keep them all straight?

Like all things astronomical in nature, gas giants are diverse, complex, and immensely fascinating. Between missions that seek to examine the gas giants of our Solar System directly to increasingly sophisticated surveys of distant planets, our knowledge of these mysterious objects continues to grow. And with that, so is our understanding of how star systems form and evolve.


Beginning with the difference between rocky (terrestrial) planets and gas giants (a term, by the way, coined by science fiction author) James Blish, the article takes you through the classification of various giant planets as they is currently understood, often giving historical perspective for those of us wrestling with the discrepancies between what we learned a decade (or more -- the term "gas giant" has been around since the early 1950s!) and what we read in the science news today.

Highly recommended as background for the general science reader and a resource for science and science fiction writers!
Posted by Deborah J. Ross at 1:00 AM No comments: