Any report I make of OryCon (in Portland OR, on or near Veterans Day weekend) must be seen in highly personal context. For me, it’s never been just another convention, but part of other aspects of my life. I used to attend OryCon regularly. I’d gone to college and then graduate school in Portland and retained a fondness for the city. My best friend from college still lived there, and I’d stayed in close touch with her. So attending OryCon also meant a visit, usually after the con when decompression with long-time friendship, and maybe a long trail ride, were especially welcome. These visits became even more important when she was diagnosed with ovarian cancer. I made a number of trips to Portland to help her and her family through the rounds of chemo that led to a series of remissions. In the nearly five years that followed, our OryCon visits became even more precious. In fall 2013, she entered hospice, and again I was present to do whatever was necessary to support her and her family in that transition. She died in October, when the weather had already turned chill and overcast with the approach of winter. That year, attending OryCon was out of the question, nor could I bring myself to consider returning to Portland for some time. This year, however, I ventured north with my older daughter to a reunion at our alma mater, Reed College. That shifted my thinking enough so that when I received an invitation to be a guest panelist at OryCon, I happily accepted. Of course, the first thing to arrange was a visit with my friend’s surviving family. Two visits, actually; one before and one after the con. A family dinner, complete with home made lasagna (vegetarian and vegan versions) marked an auspicious welcome back to Portland.

I won’t go into a recitation of all things travel and hotel. Needless to say, my usual disorientation upon encountering a new venue kicked into high gear, fueled by the vertical arrangement of the hotel (events were on 4 different floors, or was it 5 plus the green room on the 16th floor?) The OryConOps folks were as warm and welcoming as ever. I had a splendid roomie in Irene Radford, although we were both a bit too old to stay up all night talking.

My panels began Saturday morning with the topic “Fantasy vs. Science Fiction,” in which panelists and audience attempted to discern why anyone would think one better than the other when we all love them both. Conventional wisdom suggests that in science fiction, the laws of physics must be observed (with the notable exceptions of psi powers and faster-than-light travel); whereas in fantasy, magic introduces a fundamentally different system. The level of technology of the setting tends to put low-tech, medieval worlds into the fantasy camp and modern, futuristic, or space settings into science fiction. I threw out the idea that readers expect different experiences (fantasy – emotional, science fiction – intellectual, idea-driven) from the two genres, hoping it would provoke a juicy discussion. We all agreed that with the popularity of cross-overs, none of these distinctions holds true any longer.
Read more »
Posted by Deborah J. Ross at 1:00 AM No comments:

Recently I wrote about “Election Anxiety Disorder,” characterized by – among other things – obsessively checking news sources, social media, polling results, election prediction sites, and the like. Our simian brains seem to be hardwired to zoom in on changes, even small ones, in our environments. Fast-changing visual media like news programs and advertisements rely on this response to attract and hold our attention. In the same way our ancestors might have scanned the horizon for the movement of herds of prey animals or signs of a stalking predator, we scan our information horizon for signs of threat (or reassurance). So it can be difficult to tear ourselves away from that screen or newspaper, particularly when our lives are in so many other ways attached to the flow of information. For many of us, this constant reactivation and connection with sources of perceived threat our anxiety. However, some people use information as a way of managing their anxiety.

There are many styles of dealing with anxiety, from purely physical to purely intellectual, with pharmaceutical – legal or otherwise – thrown in there, too. I should modify that statement to say these are starting points. Deep, slow breathing and concomitant decreases in blood pressure, heart rate, adrenaline secretion, etc., also affects our thoughts. Talking ourselves through a stressful situation or changing how we think about ourselves or the problems we face also reduces the physiological symptoms of anxiety. No matter where we begin, we end up at the same place.

As I mentioned above, one way to manage anxiety is through information. If we can find out more about something that worries us, often it becomes less threatening. (Not always, of course.) Our fears can distort perceptions and amplify dangers, but information acts as an antidote. It also suggests logical, effective actions to deal with the problem, things that are more likely to be successful than just flying off the handle. Our minds reassure us of our ability to cope with the situation, and the resulting calm further increases our likelihood of success.
Read more »
Posted by Deborah J. Ross at 1:00 AM No comments:

This blog series began when I received a letter from a long-time fan.  It spoke deeply to me, and 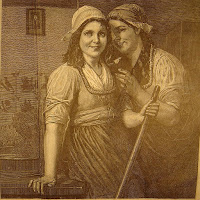 rather than answer it alone, I asked some of my writer friends to join in a series of round table blogs on the issues raised. Below is another heart-felt letter from another writer with her own struggles.

I've been trying to reconnect with writing friends after a hiatus from the creative life.  I've spent the past year or so taking care of my mom and working to pay the bills.  Mom passed away in October.
When your last parent passes away, it changes you in many ways.  That foundation you always relied on -- even as an adult -- is gone for good.  Whether you're ready or not, you are truly on your own in the world and must somehow carry on without their nurturing presence.  One of the most difficult aspects of my mother's final days was the fact that she had so many regrets about life.  She once had goals and dreams, but left them behind out of fear and a belief that these dreams were just not possible.
I'm 54 years old.  More than half of my life is over.  Writing has been a dream/goal of mine since childhood.  My mom was the only one who believed in me. I don't want to leave this world regretting the fact that I never pursued this dream to the fullest. To be honest, my writing "career" never took off.  I let fear, doubt and the negativity of others keep me from my dreams.  I want so much to be brave, to take risks with my creative life. I truly wish for a group of fellow writers who are willing to give me the encouragement and support I need to write with my heart and soul, to grow as a writer and a human being. And I want to be a support for others as well.

How do I get back into the writing life after leaving it on the back burner for so long?


Denise B. Tanaka: Do I still have what it takes?

Once I heard an anecdote about someone tearing down a spider's web every day. The spider would come back to the same spot to recreate the web, and the person tore it down again and again. After a while, the spider rebuilt the web less perfectly, with gaps and irregularities, until finally the spider stopped rebuilding the web altogether.

As a writer, I have put my manuscripts through the meat grinder of critique groups and workshops at conventions. For a long time, I welcomed harsh comments because I believed it was necessary to develop a thick skin. I used to invite lengthy brainstorming sessions and I boldly gutted my manuscripts in rewrites. I endured the pounding because I assumed it would make my writing better.

For years, I was starry-eyed optimistic about getting published. Surely all the anguish of workshops and critique groups would pay off, right? I studied all the advice of how to write sparkling query letters. Before there were email submissions, I was a frequent visitor at the post office. And I stacked up piles of rejections. Small press. Big 5 houses. You name it, I've been rejected by it.

The meritocracy myth consumed me. I wrongly believed that if my writing was “good” that a publisher would snatch it up from the slush pile. I wrongly believed that all these rejection slips meant that my writing was “bad” or that I had no talent, that I did not deserve to be one of the chosen few. Disheartened but not entirely discouraged, I kept writing more and more manuscripts in my original universe. I told myself that if one book didn't sell surely another character's adventure could. I kept workshopping and writing and rewriting in a mad frenzy.

Email ThisBlogThis!Share to TwitterShare to FacebookShare to Pinterest
Labels: advice to new writers, starting over, the writing life, vanity publishers

Here is my schedule. If you're attending, please come by and say hello (especially for my reading and autographing sessions!)