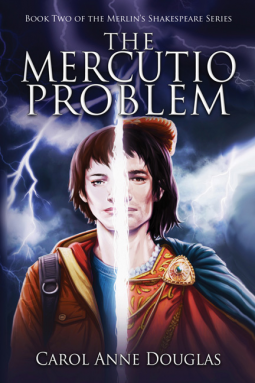 I picked up The Mercutio Problem unaware that it was a sequel to Merlin’s Shakespeare. One of the challenges of writing a stand-alone book within a series, or linked to other series, is the balance between giving the new reader all the necessary background, developing the characters well enough, and yet not boring readers who are already familiar with the cast and setting. Sometimes I can’t tell if a book is a sequel or a stand-alone with a rich and brilliantly handled back story. In this case, it became obvious almost immediately, although to her credit, the author gave me all the information I needed to understand and enjoy the present story.

So the back story from the first book is that Merlin (from the legends of King Arthur) enlists the help of Beth Owens, high school theater student, to convince William Shakespeare to write a play about King Arthur. In the course of this adventure, she meets many characters from Shakespeare’s plays, including flirtatious, charismatic Mercutio (from Romeo and Juliet) and the ultimate villain, Richard III.

At the beginning of the present book, Mercutio is dead, slain not by Tybalt but by Richard. Here comes Merlin again, only this time the problem is that Richard wants to change the ending of Shakespeare’s plays (especially his own) and is going about enlisting various other characters and the ghost of Christopher Marlowe in order to pressure Shakespeare. Not only that, but Merlin offers an added inducement to Beth, that she will take the form of Mercutio within Shakespeare’s plays and if she dies in that form, he will live again. Got all that?

Then comes the fun part, visiting the plays and interacting with the characters, many of whom wander into other plays, too. The dialog is often brilliant, reflecting not only Shakespearean language but the particularities of the specific character (for example, Julius Caesar always talks about himself in the third person and rambles on about honor and fate). Bottom has gone missing, so Midsummerland is perpetually rainy (and Bottomless). Lady MacBeth, who knows a thing or two about tyranny and regret, plays a pivotal role in organizing the resistance against Richard, and King Lear, consumed with guilt, goes rampaging through the other plays to slay anyone who wants to keep the plays as they were originally written.

For me, though, the most interesting parts of the book were the subtle examinations of gender and sexual orientation. Beth encounters the world of the plays primarily in Mercutio’s male (heterosexual) body – although for some reason her genitalia remain female. This anatomical omission strikes her with a sense of relief, which that bothered me. I couldn’t quite put my finger on it until I had a chat with a trans man friend, who spoke about longing about the flat chest he’d had as a child. It seems to me a cheat to give Beth an emasculated, sexless version of Mercutio, instead of the experience of being truly male. Being in Mercutio’s body and behaving as Mercutio offers so many openings for challenging Beth’s notions of gender and orientation, it seems a shame to chicken out of the hard parts (excuse the pun).

A number of times Beth finds herself puzzled but not put off by her/Mercutio’s attraction to women, and wonders what this means for her own, hitherto straight, sexuality. She wrestles with jealousy when her best friend, Sita, comes out as lesbian and gets a girlfriend. Unfortunately, these issues were only suggested and not fully played out. Beth becomes temporarily disenchanted with Mercurio’s flirting but she never comes to a resolution about her own orientation. It would have been marvelous to see her explore non-cis-gendered sexuality, to see her insights and empathy play out in her relationships, and to have her accept being different in more ways than being able to travel to the world of Shakespeare’s plays. While The Mercutio Problem is labeled Young Adult, I don’t think these issues are beyond teens; in fact, I see today’s sophisticated teens as hungry for honest, deep explorations of gender and sexuality.

The book’s prose itself was uneven, from awkward sentence structure and jolting shifts of place and thought progression to nicely described settings from the plays, characterizations, and occasionally brilliantly insightful lines. My favorite was spoken by Ms. Portia Desdemona Capulet, the drama teacher: “But remember that loving great people from the past must always be a one-way love.”

All in all, though, this book was an enjoyable read and a delight to anyone familiar with the many worlds of Shakespeare’s plays. I look forward to reading more of Beth’s adventures, especially her journey of gender and sexual self-discovery.

The usual disclaimer: I received a review copy of this book, but no one bribed me to say anything in particular, one way or the other, about it.
Posted by Deborah J. Ross at 1:00 AM