I Failed To Save That Chapter: What To Do When You've Lost Your Work 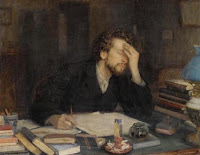 writing. Here's how I responded.

What a colossal bummer!! There's no getting around how frustrating and just plain maddening it is to lose work. I used to do that with some regularity back in the era when I had to manually save everything to disk/ette. I still have a 5 1/4" floppy that no one can read because of the misalignment of the drive when I saved it -- that I am sure contains brilliant and irreproducible words. And I just did it last year by overwriting a chapter and saving it in the cloud.

So, having been around the block on losing work enough times I know a couple of things.
One, as I began with, is that I'm going to feel wretched and desperate and aggravated no matter what I tell myself.

Two, THIS WILL PASS. Two sub-two, I won't be ready to rewrite until I am ready. Sometimes that's an antidote to Great Flaming Balls of Upset, but more often I need to go away and calm down. Do something else, like making bread by hand or chopping wood or throwing a ball for the dog. And wait for words to start coming again. That could be remembering how I started or a detail I liked. Sometimes I can re-build around that, but more often it's just a starting place.

Sometimes I'll try to recreate what I've written but it's flat, like a xerox of a carbon copy. For some, I suspect, it's better to just start fresh and not try to recreate, but mostly for me I need an entry point (think of me as a sperm cell, frantically trying to find a way into the story ovum) and then at some point I'll clear away the scaffolding.

Telling myself that the rewritten prose will be strong isn't very helpful when I'm still raging. As a matter of fact, it's dubiously helpful except in retrospect when I'm finished.

Another thing I've learned is that if I can find a way to lighten up, I'll get through the Argh stage sooner. It really is awful, but it's survivable. If you can find a way through it that results in a funny story to share with fellow writers, so much the better.
Posted by Deborah J. Ross at 1:00 AM