In the spirit of a masqued revel, here is a gala presentation of tales set in Marion Zimmer Bradley’s beloved world of the Bloody Sun. Some of these stories are humorous, others dark, some gritty, and others whimsical or romantic, but all reflect the richness and breadth of adventures to be found on Darkover.


Masques of Darkover was released May 2, 2017 and is now available  at Amazon.com, Barnes and Noble and Kobo.

Robin Wayne Bailey is the author of numerous novels, including the Dragonkin trilogy and the Frost

series, as well as Shadowdance and the Fritz Leiber-inspired Swords Against the Shadowland. His short fiction has appeared in many magazines and anthologies with numerous appearances in Marion Zimmer Bradley's Sword And Sorceress series and Deborah J. Ross's Lace And Blade volumes. Some of his stories have been collected in two volumes, Turn Left to Tomorrow and The Fantastikon, from Yard Dog Books. He's a former two-term president of the Science Fiction and Fantasy Writers of America and a founder of the Science Fiction Hall of Fame. He's the co-editor, along with Bryan Thomas Schmidt, of Little Green Men--Attack!

Deborah J. Ross: Tell us about your introduction to Darkover. What about the world drew you in?

Robin Wayne Bailey: I first encountered Marion Zimmer Bradley’s Darkover world when I was a teen and, I think, working in a bookstore. I found a DAW publication of Darkover Landfall, read it and loved it. The idea of a spaceship of humans flying off the known star charts and crash-landing on another world, of surviving and building their own culture excited me. I read the next three or four books as quickly as I could get them. Unfortunately, after the publication of Stormqueen, I drifted away from the series. Yet I never parted with those early Darkover books. Later, when I met Marion, she signed them for me, and they have honored places on my bookshelves to this day.


DJR: What do you see as the future of Darkover?

RWB: I see the future of Darkover as wide-open. Marion wrote the world as dynamic, constantly undergoing conflict and change. Nor was she slavish about continuity. I’m deeply enamored of this new anthology series under Deborah Ross’s editorship, not just because I’m a regular contributor, but because she’s allowed me to fuck with some of the concepts. To me, that’s where the fun and the challenge lies. If Marion was alive and still writing Darkover novels, that world would not look the same now as it looked when she left us. She would have changed it in ways we can’t know. On the surface, it might look similar, but it would be different. That certainty informs my entire approach to writing in her world.


DJR: Tell us about your story in Masques of Darkover.

RWB: Each new story I’ve written for Deborah’s anthologies has presented its own challenges. Often, when I agree to write for her, I don’t know what I’m actually going to write about. That was definitely the case this time. So, I took out my copy of The Darkover Concordance and just sat down to browse through it, looking for something that would spark an idea. When I came upon an entry for the Mountains of Light and read its description as an unidentified, possibly mythical, mountain range, I found that spark. How could a mountain range remain hidden from a star-faring culture with satellite and mapping technology? Did such a place exist, and if it did, how could it remain hidden? I knew at once that I wanted to play with that. The Mountains of Light would be a place of mystery, and also of revelations.

At the same time, I wanted this new story to tie subtly back into my previous Darkover stories, tales of growing dissatisfaction with the Comyn class, of budding revolution, of a criminal underbelly operating unseen and unsuspected. Each of my stories stand on their own, but I want to maintain a certain tension and build on the idea that Darkover is a world about to explode. Also, that there are things we think we know about Darkover that we don’t really know. Of all the stories I’ve written for these Darkover anthologies, “The Mountains of Light” is far and away my favorite.


DJR: Was writing this story different from a typical writing project? How did you balance writing in someone else’s world and being true to your own creative imagination?

RWB: I’ve written in other writers’ worlds before. My novel, Swords Against The Shadowland, is set in Fritz Leiber’s Lankhmar. My novel, The Lake Of Fire, is set in a world created by Philip Jose Farmer. And of course there have been several novels set in gaming worlds. But my approach is always to tell my own story in those worlds, in my own voice, and in my own way. I can’t be Leiber or Farmer or Bradley, but I can write the best story I can, using their worlds as backdrop, hopefully adding something to it in the process. If I can’t do that, I’m not interested in the project. I’ve turned down offers to write Star Trek novels and Conan novels and similar books because the writer isn’t allowed to add anything new. At the end of the work, the “reset” button is hit and none of it matters. Darkover doesn’t feel that way to me, so I’m having a good time.


DJR: Is there another Darkover story you would particularly like to write?

RWB: Is there room in me for yet another Darkover story? Almost certainly. That canvas is broad, and so much of it still really hasn’t been explored or is just beginning to be explored. It’s fun to see what the editor will let me get away with. However, I don’t have any idea right now what that story would be. It’s too soon, but maybe in a few weeks or a month, I’ll pick up the Concordance again and start browsing the pages. Or maybe one of the writers in this new anthology will spark an idea that I think deserves exploration. Time is everything. And so is timing. They’re not the same thing.


DJR: What lies ahead for you? 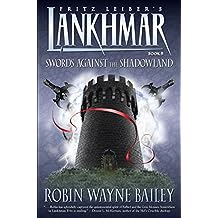 Men – Attack! is just that, a collection of wildly humorous and satirical science fiction from some of the biggest names in the field and some astonishingly brilliant newcomers. There are more short stories coming, as well. I love writing short fiction. And a sudden curve in my writing career has taken me into Hollywood these days – that’s a heady mixture of doubt and excitement all by itself. Oh, and there’s a gorgeous new edition of my novel, Swords Against The Shadowland, coming from Centipede Books.