BayCon is my local science fiction convention, one I have attended regularly for quite a few years now. At first, the hotel venue was within commuting distance, so long as I did not indulge in too many late night events that left me driving twisty mountain roads when I was already fatigued. But as the convention moved to different hotels, as conventions sometimes do, each successive move took it farther away until I was faced with either driving over an hour in either direction or shelling out for a hotel room. Fortunately, a dear friend and writer colleague offered me a guest bedroom and the chance to carpool from her house. Her adolescent children attended the con, too, so my own experience was colored by becoming a temporary part of her family and also the rhythms and accommodations of young folks. Among other things, I heard about the teen track programs, the gaming room, and other aspects of conventions I otherwise would be oblivious to. The kids reminded me that although conventions are primarily work for me, they can and should be play, as well.

The other difference in this convention is that Book View Café had one of two tables in “author’s alley,” near guest registration (the other was Tachyon Books, featuring Peter S. Beagle). Although the various attending members were not particularly organized, it was a somewhat successful learning experience and some of us sold books, talked about BVC, and chatted with fans.

We arrived at the hotel Friday afternoon, in time to hear both Juliette Wade and Chaz Brenchley read. Listening to authors read their work, sometimes work in progress or yet unpublished, is a special treat. When I have a heavy schedule of panels, I regret not being able to attend, so this was a great beginning to a convention. Not only did I get to hear two very different but equally wonderful stories but sitting quietly in a convention atmosphere helped with the transition.

It seems the older I get and the longer I live in the redwoods, the more difficult it is for me to “shift gears” into convention mode. I’ve become accustomed to long, deep silences, not to mention a slower pace of conversation. I always feel as if I’m moving (and speaking) too fast, which of course increases the risk of mis-speaking or not listening carefully enough to what the other person is saying. Most of the time, no one seems to notice. Being so aware of my own limitations, however, does make it easier for me to respond with gratitude when I am called out on an error. I appreciate not getting backed into a defensive posture.

My first panel – and I was moderator for all of them – got things moving on Saturday with Science Fiction (and/or Fantasy) as a Tool for Social Change, with A. E. Marling, Stephen “Dirk” Libbey, and Carrie Sassarego. In preparing for the panel, I had the thought that the influence of literature can be both good and bad (Mein Kampf and the world of Ayn Rand being two examples). Various members pointed out how pop culture influences people, and the metaphors used in speculative fiction allow subversive ideas to slip “below the radar.” Superheroes and media like Star Trek fill emotional needs but also empower us all to see ourselves as  heroic (for example, how Uhura inspired generations to reach for the stars). Since the theme of the con was “dystopia/utopia, we pointed out how sf/f offers “cautionary tales” of “if this goes on” or “it can happen here.” It offers hope that life can and will go on after a disaster. We need Gandalf and Dumbledore after this last election!

Chaz Brenchley and R.L. King joined me for a lively discussion of Stand-alone or Series. We swapped stories from our own careers and debated the advantages and pitfalls of each form, and how what the publishers are looking for has changed over time. Writers who once regularly got multi-volume contracts found themselves having to market completed stand-alone novels. Chaz pointed out that a stand-alone can and often does become the first volume of a continuing series when and if the publisher decides that book has sold well enough to merit more (“like the first one only different”). R. L. represented authors who have chosen self-publishing to bring out a series in rapid succession. In her case, she set up her own imprint and hired professional editors and cover designers, so the final product had high values. Her urban fantasy series is targeted at a particular reading experience, which reminded me of Amanda Hocking’s highly successful self-publishing strategy. Readers know exactly what kind of experience to expect, and frequent new releases (ever 3 or 4 months) keeps them coming back for more. This contrasts to conventional publishing, where an author might typically take a year to write a novel, which would spend another year in production.

I had further conversations with R. L. King and A. E. Marling when we tackled Writing in Someone Else’s World. I’ve spoken on this topic a number of times, about continuing the “Darkover” series created by Marion Zimmer Bradley, and also writing a Star Wars short story (“Goatgrass” in Tales from Jabba’s Palace). Both other panelists came from a gaming tie-in background, where the rules are a bit different. For example, A. E.’s experience writing for Wizards of the Coast involved NDAs (Non-Disclosure Agreements, which prohibit him from discussing material in production and other aspects of the job). R.L.’s tie-in novel was set in “Shadowspawn,” a large and varied gaming world. 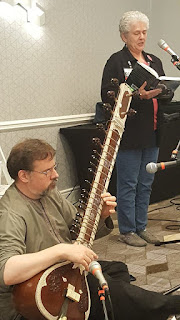 My friend Cliff Winnig played sitar in concert. He usually accompanies an author reading for one of his pieces, but this year the author he’d invited couldn’t attend, so I filled in at the last minute. I read the sword fight scene from Thunderlord, and Cliff’s music made the dancing come alive.

After dinner, it was time to play and relax. I particularly enjoyed the Masquerade and Variety Show this year. One of my Darkover anthology authors, Jeremy Erman, won “Best in Show” in the variety show for his keyboard performance of the music of James Horner, but all the other entries and costumes were highly entertaining, too. The musical duo “Library Bards” did their usual hilarious and musical job at the microphone.

Sunday morning began with a panel I actually wasn’t on. (That’s not a joke; I’ve been to far too many conventions over the years where the only panels I got to go to were those I was a participant in.) I wanted to hear the discussion of Women’s Utopias or Queer Utopias, with Meg Elison, Heather Rose Jones, Skye Allen, and Wanda Kurtcu, and I was not disappointed. With a huge audience for a 10:00 Sunday panel, the conversation with animated and thoughtful. People are not uniform, so one person’s utopia is another’s dystopia. Meg described her Philip K. Dick Award-winning novel, The Book of the Unnamed Midwife as The Handmaid’s Tale with queers and pointed out that most apocalyptic stories are asymmetrical with regard to gender and sexual orientation. Typically, such tales don’t question the binary nature of gender, and they often reinforce gender role stereotypes (with notable exceptions like Mad Max: Fury Road). Early feminist utopias didn’t even address sexual needs/preferences, assuming celibacy for equality. Novels set in utopias often incorporate the element of misfits or those who resist (Brave New World, Logan’s Run) to contrast and point out the impossibility of setting up a system that works equally well for everyone. “Who is this utopia for?” becomes a central question. While hell as dystopia is a popular topic, almost no one is interested in heavenly utopias, perhaps because “heaven” pertains to life without the body (“meat suit”) and that’s inherently boring, while the structure of a novel requires conflict or dissatisfaction. “People will always find ways to be unhappy.” All-lesbian utopias assume a uniformity of sexual activity, but people aren’t all the same in this dimension, either. “Incidental queerness” occurs when the sexual orientation of a character is not his or her central problem, it’s just one facet of that person.

My last panel was Care and Feeding of Your Creative Muse, with Skye Allen, Jennifer Nestojko, Mark Gelineau, and R.L. King. We talked about how to balance the different parts of your life: family and other obligations, self-care, day job, and writing. How to keep the ideas coming (and not forget them!) and then wrangle them into stories. How to keep the whole process fun. It’s important to develop strategies that work for you to keep you writing on a schedule and not just “when the muse strikes.” Mark encouraged us to have courage, and faith in our creative process. We talked about how to keep that faith alive when our lives fall apart and we can’t write. Hope during difficulties means remembering that “this too shall pass.” We all need reminders of how our creativity sustains and nourishes us during difficult times. Having a writing ritual can keep us going through distractions. Detractors can undermine our confidence in our work by denigrating its importance; instead, we remember that our art is how we fight the darkness.