The Great Witch of Brittany, by Louisa Morgan (Redhook) 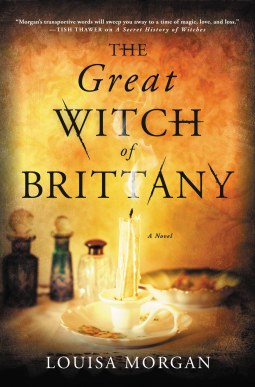 In mid-18th Century Brittany, a clan of Romani travels from town to town, trading and earning money by other means. Teenager Ursule Orchière has been raised in the stories and customs of her female ancestors, the great witches of the past. Her fortune-teller mother is not among them, using dramatic skill and common sense on her gullible village women customers. For Ursule, however, the “magic crystal” that has been passed through generations is more than a stage prop. The crystal and the grimoire she learns to read in secret open a world of spirits and spells to her. When her mother is accused of being a witch, the two end up on the run in an increasingly dangerous landscape as the French Revolution draws ever nearer…

The story is full of dramatic tension and plot twists, yet in the end it is not about a series of events. It’s about a life well lived with courage and kindness. Even when Ursule and her mother found shelter working as laborers for a farm family, I kept turning the pages to see what would happen next. Morgan’s authorial touch is deft and sure, inviting the reader to enter fully into this fascinating glimpse into history and the very real people in it.