Short Book Reviews: The War of the Djinn 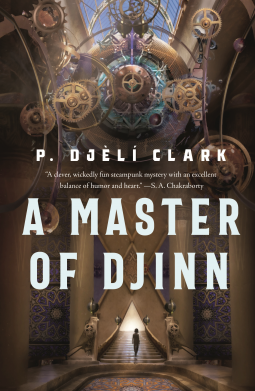 A Master of Djinn, by P. Djèlí Clark (Tordotcom)

What a luscious book! Part mystery, part thriller, part love story, part alternate history, set in 1912 Cairo. A generation ago, a great magician styled Al-Jahiz opened the door to the realm of supernatural creatures like djinns and angels. In response to the influx, the Ministry of Alchemy, Enchantments and Supernatural Entities acts as police, investigators, and regulators. Enter Fatma el-Sha’arawi, the youngest woman working for the Ministry, who is called to investigate the murder of a member of an aristocratic British cult devoted to Al-Jahiz. That same legendary figure is now stalking the city, gaining ever more numerous and more violent followers. Perhaps his most terrifying power is his ability to control the djinn, even those integrated into human society. Even the mightiest of demons. (Even the charmingly OCD djinn Ministry librarian.)

Balancing breathless action, escalating peril, and plot twists with quieter human moments, evocative details of daily life in an invented world, and the slow unfolding of the heart is always a challenge. Pace and momentum, though, are not the only story elements that hook a reader and keep us going. Clark succeeds on all levels, using effortlessly vivid prose, multi-dimensional characters, and gorgeous world-building.