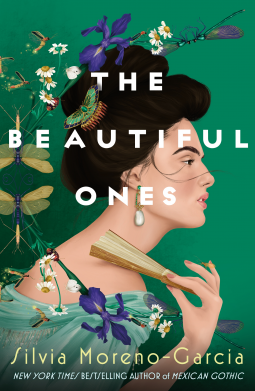 The Beautiful Ones, by Silvia Moreno-Garcia (Tor)

As I read Siliva Moreno-Garcia’s The Beautiful Ones, I kept thinking of Jane Austen’s Persuasion, with its theme of lovers given a second chance. In Persuasion, young lovers Anne and Frederick are parted when her family persuades her to reject his proposal because of he lacks riches and aristocratic standing. Years later, when he returns as a rich naval captain, they gradually overcome misunderstandings, jealousies, and broken hearts to re-kindle their devotion. The Beautiful Ones begins when a pair of youthful, parted lovers, Valérie and Hugo, meet again. By this time, however, Valérie has given in to family pressure and married, whereas Persuasion’s Anne remained single, a spinster ignored by her family. Valérie’s husband is rich and boring, his sole virtue seems to be his affection for his niece, Nina, who visits him. Hugo, like Frederick, is now rich and Valérie the icy, elegant queen of the social scene (“The Beautiful Ones” of the title). Magic comes into play since Nina, like Hugo, can move objects with her mind. While attempting to get close to Valérie, Hugo becomes Nina’s mentor in levitation. She falls in love with him and is shattered when she walks in on him and Valérie in a passionate embrace.

Here the parallel breaks down. Our sympathies are with Nina, not Valérie, who has become an unrelentingly selfish, vain, mean-spirited, possessive woman. Who she might have been if she and Hugo had stayed together is a matter of conjecture because the unfolding story makes it plain that theirs was a tempestuous, immature, and problematic infatuation that both have outgrown but not been able to let go of.

This leaves the issue of Nina and Hector, her heartache and anger at him, his gnawing guilt at having caused so much pain to someone he actually loves. Hugo’s struggles to come to terms with how he betrayed and injured Nina force him to review his past and himself in an uncompromising light. It’s a reversal of roles from Persuasion, where his was the broken heart, but strongly parallels the journey to understanding and forgiveness, both of self and the beloved, with renewed appreciation for how each enriches the other’s life. It’s a gorgeous, emotionally generous tale worth savoring again and again.