Short Book Reviews: Of Badgers and Skunks and Friendship 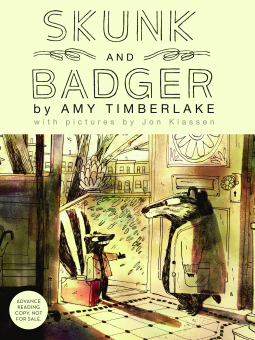 As I turned the pages of this utterly charming story, I couldn’t help think what a delight it would have been to read aloud with the whole family. The animal characters – Badger the Rock Scientists and Skunk the unwelcome guest – would surely have captivated my children (who as grown women are equally susceptible), and the combination of direct language and nuanced relationships would draw in any parent wrestling with how to convey important lessons.

The story is simple on the surface: Badger’s hermit existence comes to a crashing halt when his Aunt Lula, owner of the brownstone in which he lives, also invites Skunk to move in. Skunk is not only irreverent to the Science of Rocks and friend and patron to many chickens, but quickly makes himself at home, plying Badger with home-cooked breakfasts as he gently but persistently confronts Badger with his prejudices and white lies.

In the end, Badger takes a fresh look at how he has isolated himself, ignored the feelings of others, and done harm to a potential best friend. One of the most profound changes was Badger’s new-found ability to admit he was wrong and to apologize sincerely by changing his behavior. We could all learn from his example!

Verdict: A book to read aloud with the whole family.