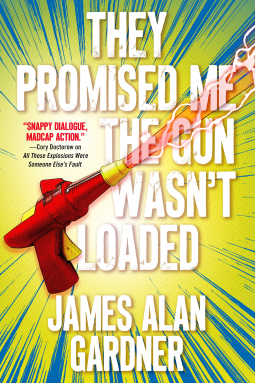 Today I chat with Canadian SF author James Alan Garner, whose wonderfully inventive and hilarious novels, All Those Explosions Were Someone Else's Fault (2017) and They Promised Me the Gun Wasn't Loaded (2018) I have previously reviewed here.

Deborah J. Ross: Where did you get the idea for The Dark vs. The Spark series?

James Alan Gardner: I have always loved superheroes. I owned the first 8 Avengers comics, bought when they first came out, plus many other comics from the early 1960s. (Yes, I'm that old.) I kept on reading Marvel and DC down through the years, until the early 1980s when I began playing Champions, a table-top role-playing game. I've been role-playing ever since, pretty much once a week for 40 years (yikes!) Over that time, I've played many games (including of course a lot of Dungeons & Dragons) but the games that stand out most in my mind are Champions and the White Wolf "World of Darkness" games in which you could play vampires, werewolves, ghosts and other such "monsters".

I don't really know what brought superheroes and "monsters" together in my mind...but when the Occupy movement started in 2011, the idea of the 1% being monsters and the 99% being protected by superheroes seemed like a natural. From that point on, it was just a matter of figuring out who my superheroes would be and what kind of trouble they'd get into.


DJR: Tell us a little about your previous books.

JAG: Before the Dark vs. Spark books, I had a science fiction series that took place in what I called the League of Peoples universe. The idea was that the most powerful alien races in the galaxy had banded together to impose a single inescapable law on the galaxy: dangerous non-sentient creatures were not allowed to leave their home solar system. Dangerous non-sentient creatures included anyone or anything who was prepared to kill a sentient creature. So if a murderer or someone even willing to commit murder tried to leave their home system, they simply died: 100% infallibly. In terms of humans, peaceful people could safely go almost anywhere in the galaxy, but anyone who tried to leave Earth's solar system with any sort of deadly weapon just died, always always always. Earth therefore remained the home of people who refused to play nice, but anyone with kindly intentions had free run of the galaxy (along with all the other alien races that were similarly civilized).

It was a fun series. Some of the books took place on Earth among the dregs who'd stayed behind. Other books took place in various star systems; they mostly featured human Explorers getting into trouble. On the one hand, villains simply couldn't go interstellar; however, any particular planet might have homegrown threats...and of course, the Explorers couldn't carry lethal weapons themselves. I liked playing around with the possibilities.

DJR: Your bio says you're a kung fu artist who also teaches it to kids. I'd love to learn more (I studied kung fu san soo with Jimmy H. Woo in El Monte CA for 25 years and have found the art influencing my writing in expected and surprising ways.)

JAG: I've been training in Five-Animal Kung Fu for almost 27 years now...although the last few months have been difficult, thanks to our friend COVID-19. Learning Kung Fu has taught me a lot about hand-to-hand fighting, a little about weapons, and tons about discipline, focus, meditation, and all those good things. But it's also brought me into contact with a wide range of people, from five-year-olds up to seniors. Without Kung Fu, the only people I'd spend time with would all be much like me: book and/or gaming nerds. I really credit Kung Fu for saving me from being completely locked in a very small bubble. (And just for the record, our five animals are Tiger, Leopard, Snake, Crane, and Dragon.)

DJR: Does Canadian sf or sf set in Canada have a special flavor? What does it contribute to the larger international community that US-based sf lacks?

JAG: SF is very often about coming into contact with The Other, whether that means aliens in science fiction, or other races/cultures in fantasy. The U.S. only has two models for this: either war, or the melting pot. Either different peoples are incapable of getting along and end up trying to kill each other, or else they all assimilate into the same unified culture (as in Star Wars, where there are many species speaking many different languages, yet they're all essentially the same).

Canada has two other models to draw on: the Two Solitudes, and the salad bowl. Two Solitudes is a famous Canadian novel by Hugh MacLennan dealing with relations between French and English Canada; they co-exist by ignoring each other. (This was more true in the past than it is today, but even now, there's not much interaction, positive or negative, between the two cultures.) The salad bowl means multiculturalism, standing in contrast to the melting pot. In a salad bowl, different cultures retain their distinctive flavors and identities, but the whole is greater than its parts. Canada isn't unique in its belief in multiculturalism, but it's a central part of our consciousness. In Canadian SF, different cultures are much less likely to fight or assimilate than in American SF; different cultures can live together with each other while maintaining and benefiting from their differences.

DJR: Are there advantages or disadvantages of being a Canadian (or non-US author)? (I hear this from Australian sf authors.)

JAG: Obviously health care is a biggie. I've never had to pay a cent for a doctor or hospital; I show my (free) provincial health card, and that's it. So that's a huge worry and expense that I never have to worry about, as compared with US writers. It's meant that I've been able to work fewer hours every day at non-writing day jobs than I'd otherwise have to. I've never really noticed any disadvantages; for example, I've never got any pushback at all from US editors if and when I set stories in Canada. Once in a long time, I've had a Canadianism confuse a copy-editor, but that just means I have to change or explain it.

DJR: Care to comment on the role of fiction/storytelling/sf in today's pandemic world?

JAG: SF has done a lot with pandemics already; trying to do something new would take a lot of effort and almost certainly wouldn't be worth it. I strongly suspect that when the pandemic is over (if it's ever over), absolutely no one will want to read fiction about it. If anything, readers are likely to want fun upbeat escapism...which is good, because that's what I love writing!


James Alan Gardner is a Canadian science fiction author, winner of the Prix Aurora Award and the Theodore Sturgeon Award, with nominations for the Nebula, Hugo Awards, and more. You can find him at: