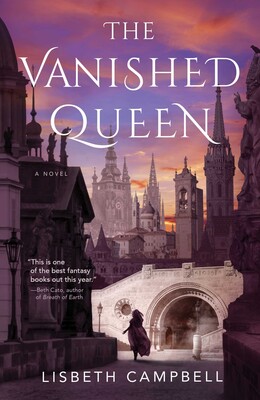 The Vanished Queen, by Lisbeth Campbell (Saga) presents a fiercely intelligent political drama in a fantasy kingdom dominated by a pathological sadist. The queen of the title was his wife, who was systematically tortured, separated from her sons, and then gone missing, “Disappeared,” presumed dead at his hands. One of the king’s cruelest acts was to do everything in his power to make the boys as brutal and insensitive as he is. A decade later, a resistance movement is gaining momentum, fueled by international intrigue and the king’s own increasingly desperate, ruthless suppression. One of the resistance fighters, a former student now a law clerk, discovers the queen’s diary in a boarded-up library, and the two time lines unfold and intersect.

What sets The Vanquished Queen head and shoulders above other fantasy novels is the intricate, pitch-perfect depiction of its characters, struggling to hold on to their humanity in a world that polarizes and debases even those with the best motives. These are smart, incredibly astute players who are all too often faced with impossible choices, both personal and political.

Campbell respects her readers, giving us everything we need to piece together the story without condescension or emotional manipulation. We are free to draw our own conclusions about complex, often ambivalent situations. With subtlety and exquisite skill, Campbell takes us on a journey through a series of moral and emotional conundrums: how is it possible to be a good person in a world where survival means doing evil deeds? When does a person become truly unforgivable, beyond redemption? And what is the place of love in such a world?