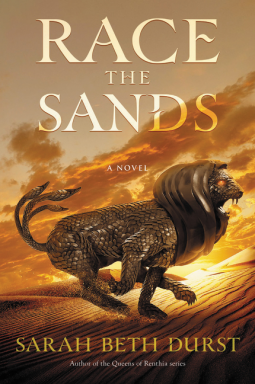 I loved this world, in which Becar, a precarious desert kingdom, politics are based on karmic “readings” by Muses of a person’s past lives. The stressed, disenfranchised populace is distracted by races involving vicious, mindlessly destructive chimeric monsters called kehoks, the reincarnated souls of those so evil and depraved as to be beyond hope. When the King dies at a youthful age and quite unexpectedly, his brother cannot take the throne until the King’s spirit is identified, presumably in a traditionally noble beast. The search intensifies as neighboring kingdoms scent weakness and prepare for an invasion. Unstable conditions like this form the perfect settings for taut, dynamic stories, don’t they?

Enter a failed Muse student who finds a new life as an apprentice jockey, a woman who trains racing monsters to pay her daughter’s tuition at Muse academy, her patroness, a socialite with a flair for politics, a Muse agent charged with locating the King’s spirit, and assorted other characters. What links them together with the Prince is the black-iron lion, a kehok even more volatile and dangerous – and intelligent -- than others of his kind. With him, the trainer and her new apprentice jockey have a chance to win the grand championship, and with it, financial security and independence. With war brewing and the search for the King’s spirit intensifying, with their rivals resorting to ever more desperate sabotage, it’s a race against time as well.

An added delight was the effortless skill with which Durst moved from inner to outer action, her subtle handling of tension, her compassionate portrayal of her characters and their situations, and her imaginative magic. Recommended for adult as well as YA readers.
Posted by Deborah J. Ross at 1:00 AM