"Writing After Widowhood"
By Barb Caffrey

A while back, Deborah J. Ross asked me to talk about the differences between writing while my beloved husband Michael was still alive, and writing now. As I've had many years since my husband's unexpected death in 2004 to contemplate this, I agreed to talk about it. Just know in advance that it's not easy, but it is possible. (Spoiler alert!) 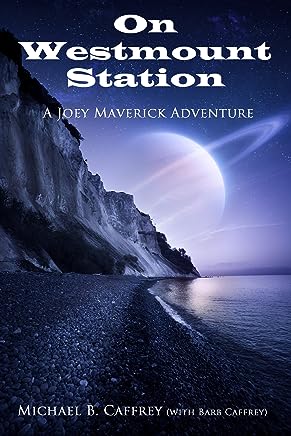 Anyway, when Michael was alive, we wrote some short stories together despite having very different writing styles. We could do this because we'd heard Eric Flint, in 2002, discuss how he collaborated with other authors. It was all about communication, Flint said, “Also, if you could check your ego at the door, that would help immensely.”

That wasn't all Michael did, mind you. He edited for me, as I edited for him. He and I talked about our stories for many hours a day, every day of the week, a great gift…and he made sure to do all the things a good husband does for his wife without prompting—and without fanfare.

It was because of all of this that I was able to write 230,000 good words in thirteen months back in 2002 and 2003. And into mid-September of 2004, I believe I wrote around 100,000 words, which isn't bad at all when you consider we had a big move across-country and had to find work and lodgings in the process.

Then, disaster struck. Michael died in September of 2004 of four massive heart attacks. He was awake after the first, but before the rescue squad could get to him, he had his second heart attack. He was clinically dead for eighteen minutes, and then was revived at the hospital. He later had heart attacks three and four…within eleven hours of the first heart attack, my beloved husband was gone.

There was absolutely no warning of this.

Not long after my husband died, I moved back to Wisconsin to be closer to my family. I wasn't much good for anyone for several years; I admit this freely. I was in deep shock, and in some ways I never completely came out of mourning. But I was able to write again within a few years, partly because my husband had left behind stories of his own that were unfinished.

To my mind, it was bad enough that my husband was dead. It would be even worse if the stories he'd worked so hard on died with him.

So even though I wrote in a completely different way, and had never written any space opera or military science fiction before (Michael's work mostly straddled those two lines), I decided I was going to finish at least some of his work and put it up for sale on my own. It would allow me to keep at least part of my husband alive, and doing that—even though most of the people around me, including several professional authors, did not believe I should be wasting my effort this way—was my salvation.

Because of that, I kept trying. I also started working, haltingly, on my own stories again. Even though a few of 'em took some dark turns, and I am still unsure to this day if they can be straightened out, getting through that time by being able to write was important.

Note that I had some very supportive friends who encouraged me all the way. A few, I could even “talk story” with…and two of them managed to, between themselves, get me down to the one convention I've been able to go to since my husband's passing, 2005's ConQuesT. I appreciated all of that, and I think all of that, too, was necessary toward me getting back on as even of a keel as I could to write.

But as I started writing again, I realized something. I am a verbal processor. I need to talk my stories out with someone who wants to hear about it. And since Michael died, I really haven't had that. Though I do have some very good friends who will let me bend their ears on occasion, they are working writers. They are doing more in the field than I am currently, and I don't want to be a millstone around their necks.

(And yes, I listen to them. Of course I do. But that's not the point.)

With Michael, I knew if I made mistakes, he'd fix them. Or he'd show me where I'd made mistakes, and I'd fix them myself. I had more confidence in going to write on a day I had little energy (as I have battled lifelong health issues), because if I screwed up on a name or made an unnecessary tense-shift, he'd catch it. So I could relax and create.

Those were the good old days.

But on my own, I have found that I am much more of a perfectionist. My Editor Voice—what I need in my "day job" of editing—never turns off. It's harder for me now to take a chance on a story like my Elfy duology, where I woke up one day with an idea and a character and just let it rip over the next thirteen months, because I don't have anyone here to bounce my ideas off, and I have a lot less confidence in myself than I used to.

There's a reason for that, mind. I managed to get my two Elfy books out there. And I wrote a third book, Changing Faces, that was a major departure for me…but none of them, not any of them, made any dent at all in the marketplace.

Now, do I take all my value from this? Of course not.

But it does make it harder when you're dealing with Life, Interrupted, to sit down and work on something over and over for months on end. It does make it harder to ask writer-friends to listen to something I've written, and give me feedback; if they give too much and it's negative, I shut down, but if they don't give enough, then I wonder if I've done my job.

Maybe you all can relate to this. (I sincerely hope so.)

But I have managed, over time, to be able to write again on my own terms. I write prose notes on a day I have little time for anything other than work or Life, Interrupted; that gives me the ideas I need when I can sit down again and flesh my stories out. I read my stories in progress aloud, because that's the easiest way for me to tell if the flow is right. And I read a lot of esoteric things (one of the books I'm reading slowly is about maritime warfare in the Roman Era, for example), because I never know when something I read might fit into what I'm doing. (Besides, it's fun to read about history. Just so long as I don't have to live there, that is.)

My output has slowed down. I might manage, now, 90,000 words on a regular basis in ten or eleven months. (It's harder for me to give a better estimate than that.) These don't include my rough draft words, of course; they only include words that make sense, are in stories, and that I'm trying to get published. (Anything else doesn't count, as far as I'm concerned. I view word counts from someone like me, with only a few novels and ten or twelve short stories, as the ultimate in chimeras.)

So, it's harder. But it's not impossible.

I urge anyone in a situation that's remotely close to my own to keep working on their creative pursuits, no matter how long it takes. It matters. It makes you feel better, more whole, like the person you were before tragedy struck. And it reminds you that you can still do things…that you aren't incapable…and that your life isn't completely over, even though it has altered irrevocably and permanently.

My late husband would be happy I'm still working on my writing. And it's because of him that I can believe in myself long enough to do things like write this essay. I know that unconditional love is rare, and the true meeting of the minds he and I had is rarer still. I cannot deny that love, nor can I betray his trust and belief in me, by turning my face to the wall and giving up.

Barb Caffrey has written three novels, An Elfy on the Loose (2014), A Little Elfy in Big Trouble (2015), and Changing Faces, and is the co-writer of the Adventures of Joey Maverick series (with late husband Michael B. Caffrey) Previous stories and poems have appeared in Stars of Darkover, Citadels of Darkover, First Contact Café, How Beer Saved the World, Bearing North, And Bedlam's Edge (with Michael B. Caffrey).