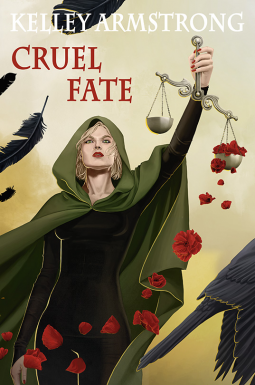 I loved Kelley Armstrong’s previous “Cainsville” novella, Rough Justice, which was my introduction to her work. In the small town of Cainsville, outside Chicago, fae have made a home, as secure as any in the modern world. The central characters, Olivia, her boyfriend, attorney Gabriel, and her former boyfriend and biker, Ricky, are incarnations of characters from Welsh legend, most notably in their participation in the Wild Hunt, that infallible instrument of fatal justice against the guilty. Both novellas combine mystery, drama, and evolving relationships in a highly satisfying way.

In Cruel Fate, Olivia’s father has just been released from prison, exonerated as a serial killer. He’s not entirely innocent, however, having murdered the real serial killer. Now someone’s after him, and it’s up to Olivia and Gabriel to find out who and why before her father becomes a victim, himself.

One problem I had with the previous book was the slowly evolution of the relationships, but reading a second novella gave me perspective and pacing. While both can be read as stand-alones, I found a deeper enjoyment in seeing self-discovery and progressive mutual understanding while a dramatic mystery unfolds. The good news is that there are a whole bunch of these stories. Now I want to go back to the beginning and read them all.