Barb Caffrey on "A Problem of Punishment" in GIFTS OF DARKOVER

On a wondrous planet of telepaths and swordsmen, nonhumans and ancient mysteries, a 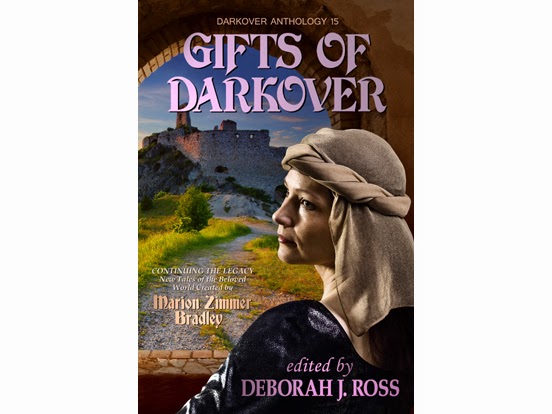 technologically advanced, star-faring civilization comes into inevitable conflict with one that has pursued psychic gifts and turned away from weapons of mass destruction. Darkover offers many gifts, asked for and unexpected. Those who come here, ignorant of what they will find, discover gifts outside themselves and within themselves. The door to magic swings both ways, however, and many a visitor leaves the people he encounters equally transformed.

Gifts of Darkover will be released May 5, 2015, and is now available for pre-order.

Here Barb Caffrey talks about her story, "A Problem of Punishment."

My introduction to Darkover was due to two books I picked up at the same time: The Shattered Chain, and Sharra's Exile. After that, I wanted to read as much about Darkover as I could, because the heroines and heroes appealed to me. They were flawed people doing the best they could amidst immense challenges, but had the additional benefits laran offered, too. I was a bit too young to understand things like the multiple marriages Kennard Alton alluded to or truly understand things like Magdalen/Margali Lorne's bisexuality, but that didn't matter; all that mattered was story.

Over time, though, I have grown to appreciate these other things, because they're a hallmark of what society is all about. (Well, maybe not the multiple marriages quite so much, even though we have a basis for that in many parts of human history. I prefer my relationships to be a bit more one-on-one than that.)

As for the future of Darkover, I believe it remains bright. There are new facets to Darkover being discovered all the time -- especially because of the novels of Deborah J. Ross, which have added much to the discussion. I'm glad to add my small part to that conversation.

I hope to write more about my character Fiona n'ha Gorsali's childhood with her father and mother (Fiona was a very minor player in The Shattered Chain, and I first wrote about her in Stars Of Darkover). I think there's a wealth of information there, and I'm quite interested to figure it out. (The education of the first female judge on Darkover is a story well worth telling!)

What inspired my story in Gifts Of Darkover was this: how did Fiona's parents meet? What was her father Dominic, who I already knew had been a judge before her, really like? And what had made Gorsali fall in love with him, and he with her? A romantic story of a smart man and an accomplished woman against the background of the Hellers appealed to me, especially since they fell in love prior to the Terranan returning to Darkover and didn't have many role models that would've helped them out.

Now, as to why I felt Dominic, a judge, could fall in love with a Renunciate? Dominic has seen it all in his courtroom, and knows how to size up people quickly. Because of that, he has fewer prejudices in certain respects than others, and he has far more respect for the charter of the Renunciates than do most other men because he has far more respect for the legal system. Because of that, I felt he could see her as an equal partner in time...and that way, love could potentially grow (or at least a strong attraction).

Most recently I wrote a story for the shared-world anthology First Contact Cafe, and finished my novels A Little Elfy In Big Trouble and Changing Faces. Both novels should be out later in 2015; my best guess right now for the former is May, and my best guess for the latter is October.


As for what lies ahead? I hope to write some more stories in my Elfyverse, I have a novella plotted featuring psychic and baseball fan Arletta James and her werewolf husband Fergus centered around the All-Star game, and I'm working on a dystopian story of uncertain length whenever I can find a little time.

Barb Caffrey is the writer of “A Problem of Punishment.” She's also written three novels, An Elfy On The Loose, A Little Elfy in Big Trouble (May 2015), and Changing Faces (also 2015), and is the co-writer of the Adventures of Joey Maverick series (with late husband Michael B. Caffrey) Previous stories and poems have appeared in Stars Of Darkover, First Contact Café, How Beer Saved The World, Bearing North, And Bedlam's Edge (with Michael B. Caffrey). Find her at Elfyverse for discussions of all and sundry, or at Shiny Book Review. (She promises she won't bite. Much.)
Posted by Deborah J. Ross at 1:00 AM