Book Reviews: A Brilliant Fantasy with an Intersex Hero 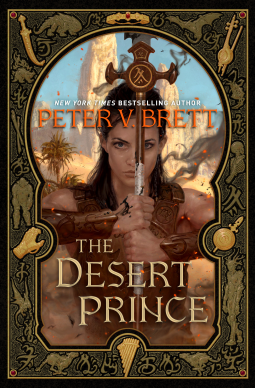 The Desert Prince was my introduction to the world of Peter V. Brett’s “Demon Cycle.” I’d read The Warded Man years ago, enjoyed it, but didn’t make the connection until sitting down to write this review. It’s a tremendous challenge for multi-volume series to make each book satisfying to the new reader without overwhelming with the backstory and boring continuing readers. Brett has accomplished this so deftly that I never missed what had come before, although now I want to go back and gobble up all the previous books. So if this is your entry point (aka “gateway drug”), dive right in!

In Brett’s world, demons arise from the core of the Earth, wreaking havoc and violence on human settlements. Fifteen years before the present, a small band of women and men created magical wards to beat back the hordes of demons and keep their lands and people safe. Now the teenaged children of those heroes have come of age, burdened by the weight of their legacies. Olive, the daughter of a duchess, has lived a life of luxury and confinement in a city, while Darrin, her childhood friend, who has a variety of magical talents, including the ability to change the density of his body, but who prefers to remain in obscurity while he creates musical magic with his pipes. Their parents tend to be both bossy and overprotective, which makes sense in light of their previous saving-the-world adventures. Naturally, neither teen is excited about living a safe, boring life of parental expectations, especially Olive.

Olive has a secret. When pregnant with Olive and her twin brother, her duchess mother engaged in a ferocious magical battle, resulting in the fusion of the two into a single, intersex person. “Which do you want to be? A boy or a girl,” the Duchess asks. Olive picks being a girl, although sooner or later, she knows, the game will be up, certainly on her wedding night. When she’s captured by a rival nation, who think to use her in a marriage alliance, her secret comes out. Princess Olive must then learn to survive as Prince Olive before the demons mass for another, devastating war. Olive is a wonderfully complex character, a joy to watch as they struggle against almost insurmountable odds, gains fighting skills, experiences love and loss, and brings their own perspective to the escalating conflicts, both between humans and between humans and the monstrous demon king, capable of controlling minds. A heroic, sympathetic intersex protagonist forced by circumstance to embrace both masculine and feminine aspects arises naturally from the world-building. The Desert Prince is written and marketed for a general fantasy audience, but readers with particular interest in LGBTQI characters will find the careful examination of gender issues especially rewarding.

Although The Desert Prince is clearly only the beginning of Olive’s and Darrin’s stories, it works well as a stand-alone. As I mentioned above, the backstory is woven into the action so skillfully that I never had the sense of not knowing what was going on or why. Instead, the story swept me up with a generosity that made every plot turn or character nuance a delight. The prose is smooth, the pacing brilliant, and the fight scenes some of the best I’ve ever read.

As I was writing this review, I came across an interview with Peter V. Brett. Check it out!