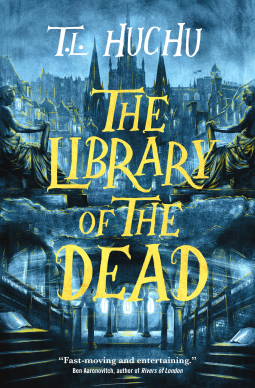 This book is just marvelous. It’s got a near-future dystopic setting, with all the creative and dysfunctional ways people adapt to crumbling civilization and a devastated ecology. A world in which ghosts hang around, pleading to speak with their loved ones and a secret academy trains wizards in the depths of Edinburgh. Best of all, though, is teen narrator, Ropa, a “ghost talker” who blends her Zimbabwean heritage with snappy Scottish slang, a gift for compassion, and intellectual curiosity.

Life is hard enough for Ropa. Along with her grandmother and smart-talking younger sister, she lives in a decaying RV and is always behind on paying rent for their spot. She’s had to drop out of school, her ghost-talking work is unpredictable, and the future doesn’t offer much. To make matters worse, children have been disappearing…and when they’re found, they suffer from extreme premature aging. In a seemingly unrelated incident, an old school friend from a posh family sneaks her into an underground library of the occult where she’s threatened with immediate execution for trespass until she’s given a student pass. Now, armed with a new classmate, she’s off to discover who’s taking the missing children and what’s happened to them.

The voice of narrator Ropa is the best part of the book, vivid and compelling and smart. She’s so engaging that I kept turning pages even when it seemed the mystery and other story elements were never going to come together (they do!) It felt like a braided novel, but I was more than happy to go along with Ropa as the linking thread. It’s impossible to overstate how powerful the narrative voice was.