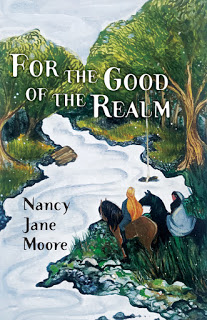 Today I chat with Nancy Jane Moore, whose feminist retelling of The Three Musketeers -- For the Good of the Realm -- came out from Aqueduct Press.

Deborah Jean Ross: Tell us a little about yourself.  How did you come to be a writer?

Nancy Jane Moore: I grew up in a world in which reading and writing were taken very seriously. My parents were both journalists, so they wrote and edited and had strong opinions about the way other people reported news and wrote stories. When my sister and I were young, my mother would take us to the bookmobile (we lived in the country, so there wasn’t a regular library nearby) to get two weeks worth of books. We’d also grab a box of Hershey’s almond bars at the store and come home to read and eat chocolate.

When I was older, my mother would edit my papers for school, which taught me more about how to write than the work I actually did in class. By the time I finished high school, I had lots of confidence in my basic ability to write.

Two things about reading fiction pushed me toward writing it. First, I came across the occasional story or novel that had a profound effect on me – for example, Doris Lessing’s The Four-Gated City – which made me want to write something that did that for someone else. For all that I read lots of non-fiction, it was always the fiction that inspired that feeling.

Secondly, I spent a lot of time as a teenager reading stories in which I found myself identifying with the main male character because any women in the stories were just there for sex appeal or to tell the man “Don’t go.” I wanted to write stories in which women got to do things. I hope I’ve done that.

DJR: What inspired your book, For the Good of the Realm?

NJM: Some years back, I re-read The Three Musketeers and one of the sequels Dumas wrote, Twenty Years After. After d’Artagnan progressed from a romantic young man to a disillusioned older one, I gave up, but the core story stayed with me. I love adventure stories, but of course the role of women in the Dumas stories was unsatisfying. So I came up with the idea that an all-woman Queen’s Guard should protect the Queen, and went on from there. The short story “A Mere Scutcheon” came first – it’s in my collection Conscientious Inconsistencies – and I finally got around to taking the advice of the editor who bought the collection to expand it into a novel.

DJR: What authors have most influenced your writing?  What about them do you find inspiring?

NJM: There have been different ones at different times, but perhaps the most crucial ones were the ones I read starting in 1979. I had complained to a co-worker about the fiction I was reading – for years I described the mainstream/literary fiction of the 1970s as “people living in the Hamptons and getting divorced” – and he said, “You should read C.J. Cherryh.” So I found the first book of the Morgaine series at the local mall bookstore and was hooked. From there I stumbled onto most of the major women science fiction writers of the 1970s and 1980s, both those writing great adventures and those writing incredible feminist fiction. (The feminist science fiction from the 70s was so much better than the mainstream feminist fiction.) I read a few male authors, too – Samuel Delany and William Gibson in particular – but mostly I read Ursula Le Guin, Joanna Russ, James Tiptree, and for awhile everything Cherryh wrote (she was so prolific she got ahead of me). Among other things, they made me realize that if I set a story in the future or in a world that doesn’t exist, I could write about women with agency without spending time explaining how they were able to be that way. That got me started.

DJR: Why do you write what you do, and how does your work differ from others in your genre?

NJM: I love adventure stories, so that’s mostly what I write. I have a pretty broad definition of adventure, but it definitely includes moral dilemmas that require my characters to take a lot of risks. My martial arts training, my feminism, and my politics show up indirectly. Well, the martial arts is sometimes pretty direct – I do like writing fight scenes and particularly enjoyed choreographing the sword fights in For the Good of the Realm.

Some years back, I wrote some short fiction that drew on dreams and my subconscious. It probably falls under “slipstream.” I like doing that in short bursts because it brings out ideas that I’m not truly aware of until I write them down. I don’t think I could write a novel in that style, though. I need a more traditional story to carry me along.

I suspect I differ from others who write science fiction and fantasy adventures more in terms of tone than in any more concrete way. My stories sound like my stories, regardless of what subset of the genre they fit in.

NJM: I’m a pantser, through and through. I get an idea and start writing until I get to the point where I figure out what the story is about. If it turns out to be long, I will eventually make notes about where it’s going, but I don’t outline.

NJM: I’ve got a couple of longish short stories I’ve been working on this spring. Beyond that, I’ve got the beginning of a sequel to For the Good of the Realm, which I need to get back to. And then there’s this generation ship novel, which is a project of my heart. It started out as a short story in response to one of my favorite stories – Joanna Russ’s “When It Changed” – but it’s become clear that I’m going to need a whole book to address what she did in about five thousand words.

DJR: What’s the strangest or most touching fan mail you’ve ever received?

NJM: Back in 2011, I got an email from someone who had read both a short story and an essay I had in a volume of the WisCon Chronicles, the anthology Aqueduct Press put out for a number of years reporting on events at the WisCon science fiction convention in Madison. It began, “Are you my long-lost twin sister” because the writer felt such connection in reading my work. It was a nice letter, so I wrote back. We corresponded for a year before meeting in person at the next WisCon. In 2014, I moved to Oakland to live with him.

First of all, what do you really want to write? I always wanted to write my own stories, but lots of other writers like doing novelizations or writing in shared universes. Some like doing comics. Others like writing for games or movies or television, which can be more collaborative. Some do more than one thing, though since almost all of these fields have some barriers to entry, I think focusing on the one that is most important to you in the beginning is important. Later, if you have some reputation, you may be able to expand. I notice that a lot of well-known SF/F writers get asked to write for comics franchises, for example, and some are working on scripts as well.

If you are willing to learn the business side – both production and sales – self publishing is a reasonable path these days. The big publishers are still going strong, but only a few people are making enough money from those contracts to make that their primary job. There are lots of small presses – I publish with a good one – but there is not a lot of money in that. So part of the decision is how much money you need and want to make from writing fiction.

I know I had the dream of quitting my day job to write fiction when I was younger. I never managed to do it, but what I did manage to do was find a day job that left me with the energy to write on the side. In my case, that was also a writing job – legal editing and reporting. I found it very useful because doing any kind of writing teaches you about how to put together good sentences and explain things clearlyand also because it was intellectually stimulating without being emotionally taxing. In the end, I’m glad it worked that way, because I never had to try to make my fiction commercial enough to support myself.

Nancy Jane Moore is the author of the fantasy novel For the Good of the Realm and the Locus-recommended science fiction novel The Weave, both published by Seattle’s Aqueduct Press. Her other books include the novella Changeling and the collection Conscientious Inconsistencies. Her short stories have appeared in numerous anthologies and in magazines ranging from the National Law Journal to Lady Churchill’s Rosebud Wristlet. In addition to writing, she holds a fourth degree black belt in Aikido and teaches empowerment self defense. A native Texan who spent many years in Washington, D.C., she now lives in Oakland, California, with her sweetheart, two cats, and an ever-growing murder of crows. Twitter: @WriterNancyJane; blog: https://treehousewriters.com/wp53/; website: http://nancyjanemoore.com/.