Short Book Reviews: Juliette Marillier at Her Most Addictive 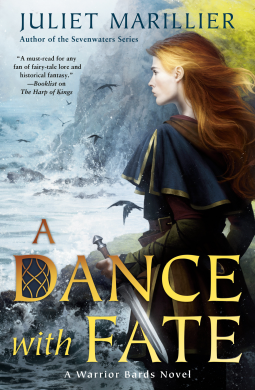 A Dance with Fate, by Juliet Marillier (Ace)

In The Harp of Kings, only the most promising students qualify for the elite Swan Island school for assassins, warriors, and spies. Two such were Liobhan, a gifted singer and even more gifted fighter, and self-exiled prince, Dau. Sent together on a spy mission along with Liobhan’s bard brother, Brocc, it was hate at first sight and an ongoing challenge to work together for the success of the mission. Now Brocc has followed his fae heritage into the Otherworld, leaving Liobhan and Dau to continue honing their skills and an increasingly friendly rivalry. A freak training accident leaves Dau blind. Liobhan blames herself, since the two were sparring at the time, but so does Dau’s vicious, abusive older brother. Rather than expose the secrets of Swan Island, the elders strike a bargain with Dau’s family: he is to return home, where he will be cared for, and Liobhan will serve as an indentured bondswoman for a year. Dau’s brother has agreed not to harm her physically, but there is nothing to stop his cruelty.

The situation is a recipe for disaster. Dau is right to be fearful of being at the mercy of his older brother and heir to the estate, doubly so because of the extreme vulnerability due to his blindness. Old traumas haunt him, threatening to drag him into suicidal despair. It will take all Liobhan’s healing skills, empathy, and bloody-minded authority to keep him alive. Meanwhile, the violently aggressive Crow People launch ever-increasing attacks on both fae and human communities.

Engaging, dramatic, romantic, and thoughtful, A Dance with Fate is Marillier at her most addictive. Highly recommended.