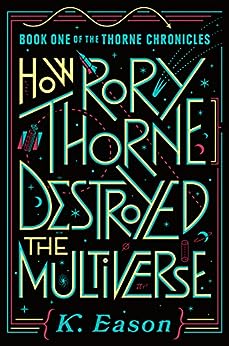 How Rory Thorne Destroyed the Multiverse, by K. Eason (DAW)

The blurb for this entertaining coming-of-age in a weird mix of space opera and magic reads, The Princess Bride Meets Princess Leia. While I appreciate the ease of film references, I found the book more strongly reminiscent of Frank Herbert’s Dune. Most of the action takes place on a space station habitat rather than a desert planet, but many of the cultural and world-building elements are eerily similar. The young heroine (named Rory out of family tradition) is, like Paul Atreides, the heir to the throne. She’s protected and educated by a pair of extraordinary, dedicated teachers. From a early age, she learns not only personal self-control but the nuanced maneuvers of controlling others. And, like Paul, she’s caught up, in over her depth, in a complicated interplanetary struggle. In Rory’s world, however, computer nets are controlled by hexes and spells, and at her birth, fairies granted her various gifts, including the ability to detect falsehoods. This is indicated in the text by offset italics of what the person is actually thinking, with often humorous results.

A peace treaty between Rory’s widowed mother and the scheming villain who murdered her father locks her into a betrothal (to a prince whose only public appearances are by his short-lived, imbecilic clones) and exile on the afore-mentioned space station. Cut off from her teachers, she’s forced to find new (and surprising) allies and most of all, to come into her own power. I love that she makes mistakes, and that her opponents are formidable. The risk to her, the people she cares about, and her home world are equally daunting.