Short Book Reviews: Hearne and Dawson Pervert The Lord of the Rings 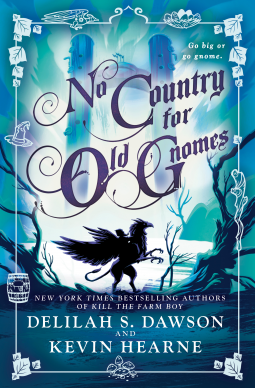 No Country for Old Gnomes (The Tales of Pell), by Kevin Hearne and Delilah S. Dawson (Del Rey)

This whimsical anti-fairytale continues loosely after Kill the Farm Boy. If Kill the Farm Boy was an approximate, sort-of take-off of The Princess Bride, No Country for Old Gnomes owes much to The Lord of the Rings. At the core of the book is a quest, although not to destroy a ring. Here the halflings are the bad guys, bent on ethnic cleansing of gnomes, with whom they theoretically co-govern according to an ancient treaty. A fellowship – again, of sorts – sets out to retrieve the original documents and restore justice to the realm. They include not only a pair of gnomes (male and female, equally bearded), a dwarf on his coming-of-age Meadschpringå quest, a halfling attorney who believes in the rule of law, a saltshaker-stealing ovitaur (like a centaur, only sheep and woman) with her heirloom automaton, and a telepathic gryphon.

Besides an occasional comment like: “an ancient dwarf named Sir Gimlet, who was involved with the Fellowship of the String,”or “in a hole in the ground there lived a family of gnomes,” a brief encounter with Tommy Bombastic, and fanciful names like “a gnome whose gname tag read Hippi Pott,” there is a hilarious take on a classic passage:

Everyone looked to Faucon [the legalistic halfling] as he stepped forward and solemnly knelt before Agape [the ovitaur].
“I will protect you as we journey to the Great Library. You have my sword.”
Kirsi [one of the gnomes, a sorceress] stepped forward to kneel, plucking a hir and tying it into an intricate design. “And my cursed bows.”
Båggi [the dwarf] trotted up and knelt, offering his picnic basket. “And my snacks!”

Several characters from the previous book make guest appearances, both living and ghostly, notably King Gustave who was formerly a goat and hasn’t quite mastered the nuances of being human but makes a decent monarch anyway. As with Kill the Farm Boy, I found the book overlong and unevenly paced, but quite entertaining. No Country for Old Gnomes has more depth and occasional poignancy, which bodes well for the forthcoming The Princess Beard.

The usual disclaimer: I received a review copy of this book, but no one bribed me to say anything in particular about it. Although chocolates and fine imported tea are always welcome.

Email ThisBlogThis!Share to TwitterShare to FacebookShare to Pinterest
Labels: satire, The Lord of the Rings, whimsical fantasy