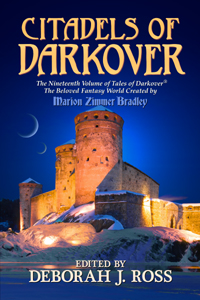 Deborah J. Ross: How did you become a writer?
Barb Caffrey: When I was very young, I started writing. I don't remember exactly when, either; I do remember that my first try at a really elaborate story was when I was eleven years old. I wrote about the first ball girl at Milwaukee County Stadium (then the home of the Milwaukee Brewers); at the time, there were no ball girls, just ball boys, and that annoyed me. But because I felt, even at eleven, that the boys wouldn't like it if the girls got to play along with 'em, my female character pretended to be a young boy. And was found out...but another of the boys liked her, and kept her secrets.
I wish I still had that story...ahem.
Anyway, I also wrote poetry, a few SF stories, and some Star Trek pastiches when I was in high school. I enjoyed it, but at the time my focus was on music; I never thought this would end up my career, and the music a sidelight, but life is what it is. (And I'd not have it any other way.)

DJR: What authors inspired you?
BC: There were so many, growing up. Probably the first writer I read a lot from was Poul Anderson; our junior high library had a lot of his books, and I found them amusing. (I did not take Dominic Flandry seriously, but I enjoyed his adventures. Had I been a bit older, I might've been alarmed by Flandry's misogyny, or at least by his cynicism. But I've always had a soft spot for him.) Then I read Andre Norton, and was so pleased to find out Andre was a woman...then, when I was in high school, I remember reading several of Marion Zimmer Bradley's books, mostly the juveniles (we'd definitely now call 'em YA), including the romance between Andrew Carr and his eventual wife, Callista.
I returned to Darkover again and again, because I found it to be such an interesting world.
Then I found The Shattered Chain, and I was riveted. The structure. The style. The story!
Best of all, I got to meet three strong women in Lady Rohana, Terran Magda Lorne, and Jaelle n'ha Melora. And I loved 'em all, and could see at least a little of myself reflected in all...no matter what choices they made, they knew they had to make them consciously, as best they could. And the idea of conscious choice was new to me, so I wanted to know more.
Anyway, more contemporary writers who've definitely made an impact include Rosemary Edghill, Katharine Eliska Kimbriel, and of course my late husband, writer Michael B. Caffrey. Without all three of them, I would not be the writer I am today.

DJR: Were there any pivotal moments in your literary journey?
BC: Several. But the one that sticks out is losing my husband in 2004. I'd just finished my first novel, and was working on my second at the time. We'd sold a short story together -- the only one completed during his lifetime. Everything looked so promising. We both wrote, we understood each other, we even figured out how to make our disparate styles work for us in a collaboration...and then, he was gone.
I can't overestimate how devastating his loss was.
For a time, after he died, I wasn't able to do much. (And this was a long time. Not just a year, or two years. We're talking five, six, seven years. Easily.) It took a bit of doing, but I finally was able to start writing again, and sold some short stories in 2011 and 2012. Then finally sold my first novel, An Elfy on the Loose, in 2012 (though it came out in 2014).
Without my husband in my life, I don't think I'd have felt confident enough to do what I needed to do. Writing is a tough and sometimes lonely business. And I was trained not as a writer; I was trained as a performing, concert musician. (I am a saxophonist, clarinetist, and was originally an oboist.) I knew I needed to write, and to tell stories, and to do what I could to make them look, feel, sound and behave as if they were living and breathing constructs...but it was really my husband who told me, "Yes, you have talent, and yes, I can help you." (He did this long before we ever got together, too. He did this for a lot of writers, back in the day.)

DJR: What inspired your story in Citadels of Darkover?
BC: I had read of an avalanche sometime last year. A successful rescue of a person who's been buried alive is extremely difficult on its face, but what happens to the person who has been rescued? How does she live her life after? And how does she face her fear so she can keep going, especially if she's a mountain guide?
This is part of what inspired my story, "The Citadel of Fear."
And it didn't hurt that I was able to figure out how to get a small banshee into the mix, either! (No, I'm not telling you more. And yes, I know I'm mean. Sometimes.)

DJR: What have you written recently?
BC: I've been working on several novellas, actually. None have yet been published, but one I have a lot of hope in mixes romance and near-future America after a semi-apocalyptic event with military matters...because I write both military SF and romantic fantasy, it seems like a good compromise. I also hope to write another story or two in my late husband's Atlantean Union (far future SF universe). And, finally, I'm working on a funny fantasy about Heaven...and the people who go there who don't get quite what they expect. (We'll see if I can bring that one off. But it's a lot of fun to write, and I'm not giving up on it.)
As far as novels go, my latest is Changing Faces, a romantic LGBT-friendly fantasy with quixotic angels and two lovers, both clarinetists, in graduate school. One is gender-fluid, the other is heterosexual...and then there is a car accident where both end up in each other's bodies. (I hope I did justice to this premise.) And the second novel in the Elfyverse, A Little Elfy In Big Trouble, was published in 2015
And yes, I do plan on more stories in my Elfyverse...it just takes time to get it right, that's all.

DJR: What lies ahead?
BC: I am hopeful that 2019 will be an extremely productive year, and I do plan on getting out at least one of the novellas in progress along with one novel...that is, if I don't get sidetracked again by Real Life™
Otherwise, there are talks between me and indie author extraordinaire Chris Nuttall to perhaps write something in one of his fantasy universes. Chris is incredibly prolific, and I'm not; still, he enjoys my editing (I've worked with him quite a bit in the past), likes my writing, and thinks something like that would be beneficial. If that comes off down the line, I'll be trumpeting that from the rooftops, let me tell you...

DJR: Anything else you'd like to add?
BC: I've enjoyed writing in the Darkover universe quite a bit. Doing so was a dream come
true; I wish my husband Michael had lived to see it. I'm sure he'd have had a story or two to tell, on his own, too!

Barb Caffrey has written three novels, An Elfy On The Loose (2014), A Little Elfy in Big Trouble (2015), and Changing Faces (forthcoming), and is the co-writer of the Adventures of Joey Maverick series (with late husband Michael B. Caffrey) Previous stories and poems have appeared in Stars Of Darkover, First Contact Café, How Beer Saved The World, Bearing North, And Bedlam's Edge (with Michael B. Caffrey).