[personal] My Love/Hate Relationship with Chanukah 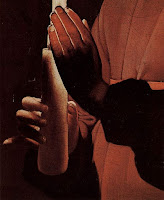 For the past decade or so, whether Chanukah falls in early December or overlaps Christmas, I have wrestled with the meaning of the holiday. I grew up in a devoutly secular Jewish family, although my father used to tell us stories of the holidays. It wasn’t until I had children of my own that observing Jewish customs became important to me. Their father, my first husband, came from a family that celebrated Christmas as a paean to overconsumption, an amalgam of showering each other with cheap gifts and gorging on indigestible food while sniping at one another. In our own home, however, we would have a modest tree, a modest meal, and presents that had something to do with the interests of the recipients.

So where did Chanukah fit it? For one thing, when my kids came along I decided not to compete with Christmas. No big gatherings. No tinsel. No horribly unhealthy meals. And no presents. Instead, we turned off the tv, and gathered around to light the candles and stumble through reading the blessings. We’d play dreidel using Chanukah gelt (foil-wrapped chocolate coins) and take turns reading aloud from a collection of funny children’s Chanukah books. The hands-down favorite was Eric Kimmel’s Herschel and the Hanukkah Goblins, although his The Chanukkah Guest came a close second. One of the appeals of Herschel was the way the dialog of the goblins lent itself to silly voices as Herschel outwitted them one by one. Needless to say, the kids loved reading together and playing games as a family. Years later, they told me that they didn’t want to give the impression they didn’t like getting presents for Christmas but they liked Chanukah better.

As the kids grew up, and I divorced and later remarried, I found myself re-evaluating the holiday. I hadn’t celebrated it as a child and I no longer had children to delight. By this time, my own Jewish identity had become increasingly important to me. What did this holiday mean, beyond a way of enjoying the winter in a non-specifically-Christian way?

I started reading the story behind Chanukah, and that’s when my troubles started.

The history as it’s usually told is fairly straightforward, this version from the website Judaism 101:

Alexander conquered Syria, Egypt and Palestine, but allowed the lands under his control to continue observing their own religions and retain a certain degree of autonomy. Under this relatively benevolent rule, many Jews assimilated much of Hellenistic culture, adopting the language, the customs and the dress of the Greeks, in much the same way that Jews in America today blend into the secular American society.

More than a century later, a successor of Alexander, Antiochus IV was in control of the region. He began to oppress the Jews severely, placing a Hellenistic priest in the Temple, massacring Jews, prohibiting the practice of the Jewish religion, and desecrating the Temple by requiring the sacrifice of pigs (a non-kosher animal) on the altar. Two groups opposed Antiochus: a basically nationalistic group led by Mattathias the Hasmonean and his son Judah Maccabee, and a religious traditionalist group known as the Chasidim, the forerunners of the Pharisees (no direct connection to the modern movement known as Chasidism). They joined forces in a revolt against both the assimilation of the Hellenistic Jews and oppression by the Seleucid Greek government. The revolution succeeded and the Temple was rededicated.

According to tradition as recorded in the Talmud, at the time of the rededication, there was very little oil left that had not been defiled by the Greeks. Oil was needed for the menorah in the Temple, which was supposed to burn throughout the night every night. There was only enough oil to burn for one day, yet miraculously, it burned for eight days, the time needed to prepare a fresh supply of oil for the menorah. An eight day festival was declared to commemorate this miracle. Note that the holiday commemorates the miracle of the oil, not the military victory: Jews do not glorify war.

Unpacking that a bit, the history is usually framed as a victory for freedom of religion (“they oppressed us, defiled the Temple, etc., but we resisted and triumphed, so now we get to worship in our own way”) with the miracle of the oil lasting 8 days as proof of divine approval. As one season after another rolled around, I felt increasingly uneasy about this. I didn’t see how this was not glorifying war (see the last sentence in the article above) by celebrating a military victory. I couldn’t understand how you could reasonably separate the “miracle” of the oil and the “we took back our Temple by force of arms.” Not persuasion, not diplomacy, not compromise. Not libertarian “do you your thing.” Not even voting on the issue.

This did not sit well with me. For one thing, setting aside my commitment to nonviolent solutions, it means that if one side were winners, the others lost. People aren’t thrilled about losing, by the way. The feelings fester into resentment and the thirst for retribution. Every 3 year old knows this.

Then I started considering those losers, those soldiers dying far from home. Not being a scholar of Greek history, I don’t know if they had a choice to enlist, or if they did so out of loyalty or from hope of a better life. I did know I didn’t feel good about celebrating their deaths. I couldn’t escape the connection. Sometimes it felt as if I were lighting candles for the peace of their spirits.

Matters got even worse when I looked even more carefully at the story. I began to see the conflict not as Greek oppressors versus those who sought only to worship as they chose. It was a conflict within the Jewish community between hard-liners who wanted to keep all the power within the priestly caste and those who saw commonality and good in the world in which they were increasingly assimilated. I suspect the heads of the Maccabees would explode if they knew how many modern Jews also practice Buddhist meditation, yoga, or celebrated…Christmas.

At this point, I’d like to say a few more words about Christmas. It’s nigh onto impossible to ignore, growing up in a Western country. I’ll set aside the pagan (or not) origins of many of the traditions and just say that much of the holiday has little or anything to do with practicing Christianity. I love the music and the foods and the fragrances (fresh-cut pine trees! oranges stuck with cloves! hot cider with cinnamon sticks! clove-scented ribbon candy!). I love that the ideal is for us to set aside our differences in the spirit of “peace on earth and good will toward all.” I loved walking through gently falling snow, serenading the faculty members of my college, each singer holding a lighted candle.

In fact, I love the idea of lighting candles in the darkest time of the year. I cherish things that bring us together instead of separating us. This is not to say that all of us must be alike. Each family’s, community’s, ethnicity’s particular history has its own unique value. I just don’t want to be jumping up and down for joy because my “side” won.

There’s a deeper issue here, which is Who has the power? Who is making the rules? A small group of priests (men, of course) who want things done the way they always have been? The pioneers and experimenters who answer to their own consciences? We ourselves, flawed and imperfect as we are? One of the many things I appreciate about modern Judaism is the insistence upon finding our own understanding (“Two Jews, Three Opinions”).

Well, my opinion is that I get to make up my own mind how to celebrate Chanukah.

During this personal journey, an image that recurred to me came from the television series Babylon 5. At the end of the second season, as the Shadows are closing in and the future looks grim, Susan Ivanova stands in a darkened room, lighting Chanukah candles. She was not just one Jewish woman, she was me. She was all of us, yearning for hope in dark times and bringing tiny points of light into a troubled time. The more I thought about it, the more this image helped me to reclaim Chanukah. It doesn’t have to be about “the miracle of the oil” or the victory of the Maccabees. It can be whatever is meaningful to me. That’s the “free to worship as we choose” part.

So this year I lit candles with my family and contemplated the wiliness of Herschel of Ostropol in outwitting the Goblin King and all his hench-goblins. I will greet my gentile friends with whatever holiday wishes they like. I give myself permission to enjoy it all.

If there is a miracle for me in Chanukah, it’s the resilience of the human spirit and our ability to take a difficult passage and find in it a message of universal hope.