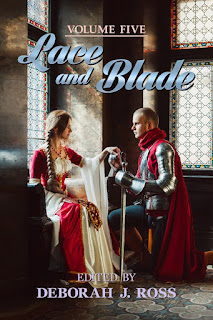 From lands distant or nearby, familiar or utterly strange, historical or imaginary, from ancient times to the Belle Époque comes a treasury of luscious, elegant, romantic fantasy. Come with us on a journey through time and across boundaries, inspired by the longings of the heart and the courage residing in even the meekest person.

The release date is Valentine's Day 2019, but you can pre-order it now:

I became acquainted with Anne Leonard through a serendipitous connection with a mutual writer friend and was delighted with her submission to this anthology.


Deborah J. Ross: Tell us a little about yourself.  How did you come to be a writer?
Anne Leonard: I started writing seriously when I was 14 and haven’t stopped (although there have been some hiatuses). I got an MFA in fiction and just kept chugging along. When I finally sold a novel, Moth and Spark, I was 44. I’ve always gravitated to novels as a form and have only become really serious about short fiction in the last few years. I’m driven by language - I love words, and bad prose will make me give up something I’m reading even if there’s an interesting plot. I read in many genres and try to learn from them all.

DJR: What inspired your story in Lace and Blade 5?
AL: “Fire Season” was originally started after a visit to Istanbul, because I wanted to write a story about a djinni. The original inspiration was pictures of California wildfires. I wrote it, submitted it a couple times, then let it sit. Then a California wildfire hit my community hard (a year later, people still don’t have their homes back), and I tore the story apart and started over with a greater sense of what fires really do. It was grimmer but much more authentic. By that time I knew more about how to write a short story, too, which was another impetus for revision.

DJR: What authors have most influenced your writing?
AL: It’s a pretty endless list, because I am always paying attention to how other writers work. But most of the strongest influences are probably the authors I read as a kid and teen. I only recently realized just how much Ray Bradbury has shaped my work. Stephen King has been an influence for sure. As a fantasy novelist, I have been influenced by Tolkien and Le Guin. Shakespeare continues to be influential. [Joseph Conrad's] Heart of Darkness, problematic though it is, is a book I come back to pretty frequently. I sometimes read poetry to kick my mind into gear, and that’s whoever I’m in the mood for at the time.

DJR: How does your writing process work?
AL: I’m a “pantser.” I have tried all sorts of methods of outlining, to no avail. I recently read Stephen King’s On Writing, where he uses the metaphor of writing as uncovering a fossil, and that really fits for me. Part of the pleasure and fun of writing is when my characters take me places I hadn’t anticipated. Usually it’s an image and a few words that get me started, rather than “I’m going to write about X.” On the day to day basis, I try to write every day but if I get really stuck I don’t beat myself up over it, and I read a book or take a walk or enjoy a movie instead. I talk my plot and character problems out with my husband or other writers. I revise constantly. The method of writing a really messy first draft and fixing it later doesn’t work for me because if I don’t take the time to see what I have, I’ll write a bunch of crap that has to be cut later without giving me anything new to hold onto.

DJR: What have you written recently? What lies ahead?
AL: I’m in the final revision round of a fantasy novel about a tyrannical and abusive king and, as my agent says, “the people who want him dead.” The characters include a middle-aged woman resistance leader, a soldier’s daughter avenging her unjustly executed father, and the king’s sons (who oppose him). There’s also a backstory about the queen, who disappeared a dozen years earlier. On one level the novel is a story about the hell of living with an abuser and on another it’s about how people find their strength to resist injustice.

DJR: What advice would you give an aspiring writer?
AL: If you are lucky enough to have good teachers, listen to them, especially when they make you mad. There’s a good chance that anger means they’re right. Persist. Read widely and outside the genre you write in. Find good critique partners, and revise ruthlessly. That scene you’re holding onto because you love it even though it doesn’t fit - it has to go. Sorry.

A lawyer and mediator, Anne Leonard is the author of the fantasy novel Moth and Spark. She also has an MFA in Fiction Writing and a PhD. in English literature. “Fire Season” was first drafted after a visit to Istanbul and substantially revised after wildfires burned through many communities near her home. She lives in Northern California with her family and two cats.