Deborah J. Ross: Tell us about your introduction to Darkover.


Evey Brett: Back in 2002 when I was just out of college, I got a job working retail at a now-extinct Foley's department store in a mall. There was a Waldenbooks right across from the store, so I'd often go get a book and settle down in a comfy chair somewhere in the mall to eat my lunch and read. One day I was looking for a new book and picked up The Fall of Neskaya, and I was hooked. Fortunately for me (and the bookstore) they had several other Darkover novels as well.


DJR: What about the world drew you in?

EB: I'm a sucker for stories with telepaths and damaged characters. I'd gone through a number of Mercedes Lackey's books, so finding Darkover gave me a whole new world with a sizeable canon to explore. Having just read the back of The Fall of Neskaya, I'd still pick it up to read because it's got everything I want--telepaths, power, gifts, a tormented character with a secret he can't reveal.


DJR: What inspired your story in Crossroads of Darkover? How did you balance writing in someone else’s world and being true to your own creative imagination?

EB: Since I came awfully close to the deadline with my last Darkover story, I kept trying to think of a plot early on. I had a vague idea of someone with a number of gifts but in nearly useless amounts, but when I started writing there wasn’t really room for more than one gift. I did keep thinking of Allart Hastur from Stormqueen!, and how the multiple futures he saw kept getting in his way, so I went with a variation on that gift and figured out a plot from there.

I did ask Deborah what she thought of a couple ideas when I was partway through, and she gave me a couple ideas which helped tremendously, so I was able to finish this story with time to spare. It was also the only complete story I managed to finish in 2017, so I’m glad it was for a world I care so much about.

For me, it's actually easier for me to write stories within the limits of a particular world or theme, and I've been doing far better at selling stories for anthologies than I have at selling stand-alones. Limits, like historical or world-building details, actually seem to force a better story. I like puzzles and problem-solving, so figuring out how to make my own ideas work within certain limits is fun.

DJR: Is there another Darkover story you would particularly like to write?

EB: I still want to do something with chieri or someone who doesn’t fit the gender binary norm. There are a lot of options, I just have to figure out a plot to go with it.


DJR: What have you written recently? What is your favorite of your published works and why?

EB: Nothing else recent, I’m afraid. One of my favorite stories was published in The Myriad Carnival from Lethe Press, called “El Amor Brujo (Love, the Magician.)” It’s based on a symphonic piece of the same name by Manuel de Falla, and follows the same idea of a gypsy maiden haunted by the ghost of her dead lover, only my main characters are a male trick rider, a rather unusual Lipizzan stallion, and a young man with secrets of his own.


DJR: What lies ahead for you?

EB: I’m not entirely sure at the moment. My first and most helpful e-book publisher closed its doors at the end of 2017, so I’ve gotten the rights back to four novels and a few novellas that are now homeless, and I need to figure out what to do with them. I have a couple anthology stories coming out this year. Past that, I don’t know; I’ll have to see where the muse takes me.


DJR: Anything else you’d like our readers to know about you, Darkover, or life in general?

EB: I owe a great deal to Darkover; because of this world, I talked to Deborah during one WesterCon and we became friends. She published my first story in an anthology called Lace and Blade 2; I published one of her stories in a supernatural horse anthology of mine. So it means a lot to me to be able to add my little bit to a world that changed my life for the better. 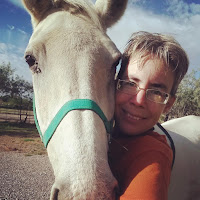 After being ordered (or perhaps coerced) to move to southern Arizona by her Lipizzan mare, Carrma, Evey Brett developed a fondness for the local creepy-crawlies such as snakes, scorpions, tarantulas and Gila monsters, not to mention the coyotes, buzzards and hawks that frequent the area. Some of those critters (and/or Carrma) have influenced a number of Evey’s stories, including one in Masques of Darkover and several in Lethe Press anthologies. When not feeding carrots to her equine mistress, Evey can be found shuffling papers for the city or reading submission stories for The Magazine of Fantasy and Science Fiction.
Posted by Deborah J. Ross at 1:00 AM