My friend and fellow writer, Mary Rosenblum, died in a plane crash on Sunday, March 11. Like everyone else who knew her or knew of her, I was stunned by the news. She was so active, so intensely alive, that it’s still hard to wrap my mind around a world without her in it. She touched so many people’s lives, both personally and through her work. Everyone who knew her has Mary Stories. Here are a few of mine.

I met Mary near the beginning of our literary careers. Here’s her version of that encounter, from her introduction to Ink Dance: Essays on the Writing Life:

Deborah Ross introduced herself to  me at the first Science Fiction conference I ever attended in Portland, way back in, hmmm, must have been 1989, right after I’d started selling my short stories and showing up in the reviews as a ‘hot new writer.’  The ‘new’ part was certainly true and I was so flattered when this established author introduced herself and had clearly heard of me.  We’ve been good friends ever since, through the ups and downs of our personal lives and our careers. 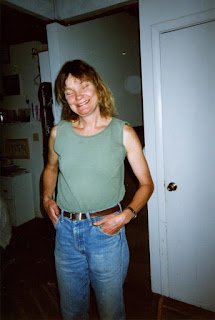 Mary and I used to joke that we were 2/3 of the Reed College Alumni Society of Science Fiction Writers, the other 1/3 being David Eddings. That’s changed over the years as more Reedies have ventured into the genre, but was worth a giggle or two.

This is one of my favorite pictures of Mary, taken around 1999. Often she appears solemn or sad, but she also had a great sense of humor. I love how happy and relaxed she looks.

I visited with Mary sporadically over the decades that followed, often using Orycon or my college reunions as an excuse to fly to Portland and see her, and also my best friend (more about that later).

On these visits, Mary and I cooked together, for some loose value of “messed about in the kitchen.” Mary made the most amazing sourdough biscuits, the kind that are all tangy and crusty and crowded together in a pan. When I asked her for the recipe, she said: Deborah, I’m almost embarrassed to give you the recipe for the sourdough biscuits. I warm some milk, add starter and flour until it’s the consistency of cake batter. Let it set overnight or all day. Mix 1 ½ tsp yeast and 1 T sugar into the starter and give it 15 minutes to dissolve. Mix 1 c. flour, 1 tsp baking powder, and 1 tsp salt, and dump into the sponge. Mix, and then knead in flour until the dough is solid enough to cut, but not too heavy. Cut into rounds and bake at 400 until done, about 20 minutes. Is this vague enough for you? I’m afraid I do bread stuff by feel, not by measure. If you pour boiling water into a pan in the oven before you put in the biscuits, you’ll get that crisp woodstove crust.

Now you too can enjoy Mary Biscuits, although ice cubes work even better than boiling water, as they do eventually boil at 400 degrees.

Another food-related memory is watching Mary make ricotta cheese from her goat milk. Whatever she did, whether it was farming or goat management or dog training or elk hunting or aviation, she approached it fearlessly and with enormous gusto. As a consequence, she was very good at many things.

Mary always had not one dog but several. When we’d talk dog training, she’d encourage me to “speak dog” rather than blindly follow any ideology. When I first met her, her English Mastiff, Shiloh, was one of them. (This was before Obadiah the Amazing Rottweiler, and Cricket and the other Aussies.) Shiloh was huge, around 160 lbs, but a total sweetie. She’d crawl into bed with me when I stayed over. Mary told me that once a buyer for one of the extra male goats (she raised dairy goats for many years, which means dairy goat kids, which means extra male baby goats), anyway this man came out to buy one and made Mary uncomfortable by coming too close and, as I remember the tale, pointing at her. Shiloh took exception to this behavior, growling and placing herself between the offending human and Mary. When the guy didn’t take the hint, Shiloh grabbed his wrist in her jaws, not bearing down but simply holding still. After what must have been a very long moment, Mary quietly asked Shiloh to release him. The man departed posthaste.

I loved watching Mary with her dogs. She was so calm and consistent, the focus of their eager attention. I happened to be visiting when she introduced Cricket, then still a very young dog, to sheep. Cricket took off after the sheep, genetics took over, and she immediately began rounding them up into a proper flock. Mary and I grinned at each other.  “Of course,” Mary said, “she’ll need some training.”

When my best friend was dying and in hospice, I came up to Canby for about 7 weeks to care for her and her family. Mary lived only a few miles away. The work was emotionally intense, and when I needed a day’s break, Mary welcomed me with her quiet, undemanding hospitality. My memories are blurry about what we did all day, although I expect a fair amount of it centered on dogs, cooking, and her enthusiasm for flying. Once – I think it had been in a previous visit, but might have been this one – she took me up in her plane. It was exhilarating to have so much space all around me, in all directions, but nothing compared to the moment when she told me to take over. Without any prior warning, mind you.

When I edited my first anthology, Mary was one of the authors I thought of first. Her work was deep, thoughtful, and often prescient. Her novel, The Drylands, portrayed a Pacific Northwest drought-stricken due to climate change – and it was published in 1993. So Mary wrote “Night Wind” for Lace and Blade, and it made the Nebula Final ballot that year. Both of us, author and baby editor, were majorly chuffed. One of the cool editorial things about the story (go read it for the other things) was that it was one of two Spanish highwayman stories I received; for the second volume, she send me a magical Chinese general story, and again it was one or two, but very different and completely Maryized. I felt honored she trusted me with her stories, and it was a wonderful experience to work together in this way.

After my friend died, I didn’t return to Portland for several years, and when I did attend Orycon again, I tried to connect with Mary, if only for a quiet chat in a corner. As I remember, she either didn’t attend the con or came only for a few hours when I was otherwise committed. I remember thinking it was a shame, but not a big deal as there would be a next time. Naturally I now regret not finding a way to see her, but she of all people knew the balance of life demands, privacy, and friendship. She was an extraordinary woman, a gifted writer, and a dear friend. If I close my eyes, I can see her smiling at me, and I expect I always will.