Coming in May, an all-new Darkover anthology featuring tales of decisions, turning points,

Deborah J. Ross: What are you working on today?

Marella Sands:  I should be working on the next chapter of a novel I am writing with fellow author Mark Sumner. However, I'm kind of stuck in a place where I've got one character in a concentration camp, and another just outside the gate, and somehow they have to communicate enough to manage a rescue without much in the way of resources or backup. Thus, it seems like a good time to answer author interview questions. It's also laundry day and that's currently sitting on the bed in a pile waiting for me. So, you know, priorities.

MS: Awful. I had no idea how to write a novel or structure a long story, and writing is a lot of work, which I didn't quite realize at the time. So I'd write a little every now and then when it seemed like fun. Needless to say, I didn't get more than five or six chapters in. I tried again a few years later and the same thing happened. I had to join a writers group where others were producing book-length manuscripts before I started to figure out how to do it and had people to ask questions of (this was in the pre-internet, pre-email era).

DJR: What was your first successful novel-writing experience like?

MS: When I finally realized how much slogging was involved in getting out a book, I started writing every evening after work from about 6:30-9:00. It still took me months to get the first draft out, but at least I got to the end. And then I got the joy of realizing how much MORE slogging was involved in getting draft #2 ready. What sane person does this to themselves? Since I'm still doing it 30 years later, my sanity is clearly in question.

DJR: Is there a Darkover story that has eluded you so far?

MS: I want to write a story about the origin of the clouds in the Lake of Hali. At least, with "The Song of Star Girl," the characters visit the future location of the lake. But I still don't really know what story to pair up with that idea. I also like a line from "The Forbidden Tower" where someone says that, in the ancient days, the matrices were used to summon all kinds of monsters from other dimensions. I think a monster story could be exciting. Maybe some kind of wiggly tentacled semi-Lovecraftian thing could ooze out of the Lake of Hali after being called forth by a powerful matrix and an unscrupulous Keeper.


DJR: What's happening in your life that needs to be incorporated into a story or book?

MS: I'm currently the president of a cemetery board. I'm learning all kinds of things like how to lay out graves; how to follow all the state rules about trusts and money; how to find vendors to mow the grass, dig the graves, and pour the foundations for markers; plus plenty of other stuff. After learning all this, I definitely need to set a story in a cemetery. Maybe a book. Maybe the person running the cemetery isn't an ordinary person at all. Exactly who or what they are remains fuzzy, but that's okay, because I've got this character to get out of a death camp today. Plus I'm working on my Angels' Share series, which features a bartender caught up in a war between angel armies.

DJR: Was there a moment when you realized you were an actual author?

MS: I worked for a man who was going to write a book someday. He had the subject and title, and he liked to regale the people who came to his office about all the things he was going to put in this book. SInce I was working on books of my own, and knew people who supported themselves with their writing, I was supportive of my boss but never awed by his pronouncements. It wasn't until I saw a woman looking at him with literal wonderment that I realized that was all he wanted - the adulation of people who were impressed with someone who was going to be an author "someday." That's when the difference between just saying you're a writer and actually being a writer hit me. I saw my ex-boss' obit a while ago; I bet he passed without ever getting around to writing a word. But maybe, for him, that wasn't the point. 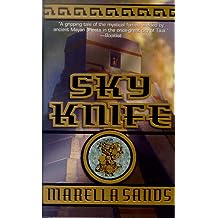 author bios. This time, she's pretty sure it involves rabbits, kabobs, palm trees, and campfires, but not necessarily in that order. Currently, she is: working on a novel of alternate history; producing novellas for her Angels' Share series; shopping around a novella-length Thai ghost story; and producing short stories. This is her fourth sale to the Darkover anthologies and she has also sold a story to Lace and Blade 4. For this particular tale, she was contemplating the Ballad of Hastur and Cassilda (which dates back to at least the Ages of Chaos) and thought that it must have had historical roots in actual Romeo and Juliet style tragedies deep in Darkover's past.
Posted by Deborah J. Ross at 1:00 AM