Barb Caffrey On Writing Fiona n'ha Gorsali…and Her Family, in REALMS OF DARKOVER 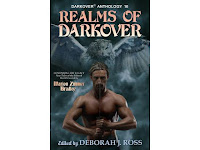 Realms of Darkover®, the newest Darkover anthology, will be released in May 2016. You can pre-order it at Amazon (and it will be available at other outlets soon). Here’s a contributor interview to whet your appetite!

Marion Zimmer Bradley’s beloved world of Darkover encompasses many realms, from glacier-shrouded mountains to arid wastelands, from ancient kingdoms to space-faring empires. Now this all-new anthology welcomes old friends and new fans to explore these landscapes of time and place, history and imagination.


When Deborah J. Ross, esteemed editor of Realms Of Darkover, asked me a few interview questions, I asked her a question in return: "Could I write my answers in conversational style instead?" She told me to go for it, thus, here I am.

I'm thrilled to talk about my character Fiona n'ha Gorsali. She's the most powerful judge Darkover has ever had, and was introduced briefly by Marion Zimmer Bradley herself in The Shattered Chain. MZB introduced Fiona as a judge on the powerful Courts of Arbitration, and gave a brief description—tall, thin, grey-haired, and well-dressed.

When I sat down to write a story for Stars Of Darkover, I decided early on that I wanted to find out more about Fiona. What had happened to put her on the Courts of Arbitration in the first place? So I wrote "At the Crossroads," that showed how Fiona was able to forge a consensus with highborn, lowborn, and Terranan included. Surely something that unusual would warrant that remarkable individual being placed on the Courts of Arbitration, Renunciate or no…and so it transpired.

Then, when Gifts Of Darkover came around, I decided to write about Fiona's parents in "A Problem of Punishment." I knew her mother's name was Gorsali, and that she was a Renunciate; I figured that Fiona's father must've been a judge before her. But who was this man, Dominic macAnndra? As he hazily introduced himself, I found a man of courage and conviction—and also a man who fell in love at first sight, during a conflict, with his eventual freemate (wife), Gorsali.


Simple: I figured I'd write about her unusual childhood, next.

That's how the story included in the forthcoming Realms Of Darkover, "Fiona, Court Clerk in Training," came to be. In this story, Fiona is only thirteen, and wants to become a judge more than anything. But the first step in becoming a judge on Darkover is to become a court clerk, and she needs access to scholarly records held at Nevarsin before she can take the test. (And obviously, that test can't be administered by her father, the local circuit court judge, either.) So what's to do?

Obviously, keeping Fiona from her heart's desire wasn't in the cards. But making it too easy wouldn't make any sense, either. On Darkover, it's very unusual to have a girl interested in any career outside the Guild House, and being a judge doesn't normally factor into the equation. Besides, even though everyone in the Nevarsin Guild House knows Fiona is destined to come there someday, no one's quite sure if Fiona can become a judge or not.

Still, Fiona is a remarkable young lady. She's studious, extremely intelligent, stubborn, but also a dutiful daughter who wants more than anything to please her beloved father—and not to get on her mother's nerves in the process. If anyone can do it, she can…but how could I do this and remain faithful to Darkover canon?

What I decided on was this: the head of the Nevarsin Guild House, Kestra n'ha Piedra—whom we met during the second story, "A Problem of Punishment"—would be involved in the decision-making process. And that another family, cousins of Dominic's that Fiona's never met before, would come to visit…also another judge, who can test Fiona for the court clerk's position.

So, that's why I wrote "Fiona, Court Clerk in Training." I had fun with the story, and I enjoyed meeting Fiona as a spunky thirteen-year-old.

As to what else I have going on at the moment? Well, A Little Elfy In Big Trouble came out in late November of 2015…it's the second novel of the Elfy duology, and my second novel overall. I have a sequel planned going under the name "An Elfy Abroad"—actually, it's going to be a trilogy—but I don't know when it'll be coming out. (Late 2017, perhaps. Or maybe even into 2018.)

As for what lies ahead? I hope I'll get a chance to write another story for the next Darkovan anthology, of course! I even have a subject all lined up…Fiona on what amounts to a judicial internship, far away from her family, at the ripe old age of twenty or so.

But as far as non-Darkovan pursuits, what I'm trying to finish now is my transgender fantasy-romance Changing Faces, which is due out later in 2016. Providing I can wrestle that story into submission, I'll next take up a prequel story in my late husband Michael's alternate history/fantasy universe, "The Quest for Columba." And I have a couple of military science fiction stories rattling around in my head, too, set in my husband's Atlantean Union universe…along with two other potential novels and one other novella. (Though my stories tend to grow like weeds, once I prune them back, they usually make some sort of logical sense. At least, such is the hope.)

The last question Ms. Ross asked is this: "What is the future of Darkover?"

Personally, I think the future of Darkover is extremely bright. MZB left behind a huge, sprawling canvas to work with, and there's so much left to explore that it boggles the mind. Ms. Ross herself has added greatly to the oeuvre, which is why it's such a blast working with her as an editor…all I can say is, "Long live Darkover!"
Posted by Deborah J. Ross at 1:00 AM