The Tajji Diaries: Patience and Progress

One of life’s aggravations is that all too often things happen in their own time and not when I think they should. Writing progress, weight loss, getting from hither to yon on the freeway, you name it.

Dog training definitely fits in this category. Sometimes they “get it” right away; you can see the lights go on in their eyes. Then they’re delighted that things make sense. It must be frustrating to them to not understand what we are asking them to do and why we are unhappy with them. I think that’s why positive (reward-based) training works so well, because it provides a way for us to tell the dog that he did what we wanted. Anything besides the desired behavior -> no cookie, try again. Desired behavior -> cookie! Happy dog -> let’s do it again! We’ve paired something we want the dog to do with something wonderful. Complex behaviors can be broken down into component parts and chained, with lots repetition so they become one flowing behavior.

Behaviors that are naturally part of the dog’s repertoire are easier to train, especially if the dog offers them just by being a dog. This requires patience and precise timing of the reward. Since it’s highly unlikely we’ll be able to offer a treat within a second of the desired behavior, we use a marker, like a clicker or “Yes!” that the dog has come to associate with the reward. Then we have to set up a training environment in which the dog has the choice to offer the behavior we want, or something close to it that can be then shaped. For example, if we are training “Down,” instead of luring the dog with a treat, we bring the dog into an enclosed space (so there are some limitations on what the dog can do) and wait. And wait. And wait. Until the dog lies down, which is then rewarded. Rinse and repeat. Usually, the dog will soon begin lying down  many times in rapid succession. Then we add the cue word. It may take longer for the initial connection, but once that’s made, the dogs joyfully perform the behavior. It’s fun to watch dogs that have been trained this way. At the beginning of a new session, they run through all the behaviors they’ve ever been rewarded for, watching carefully for the trainer’s response. Often they’ve learned how to try new things, the doggie version of being creative. 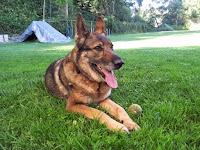 If we lure or place the dog into position, we get the desired behavior right away, without having to stand there as neutrally as we can while the dog tries this and that. However, the connection between the behavior, say the Down, and the reward is not as clear for the dog. He thinks, Am I being rewarded for sniffing the treat? For extending my head? For having the trainer’s hand on my back? Or for lying down?

All this has to do with connections we want the dog to make: “Down” cue + Down behavior -> Yes! + cookie. What if we want to break a connection the dog has already made?

In the case of Tajji, our retired seeing eye dog, she had become traumatized during her work, especially to the presence of other dogs. Small dogs elicited the most reactivity in her. We began desensitizing her as soon as she came to live with us, nearly a year and a half ago. We had to teach her the marker  (we use “Yes!” because it leaves hands free), eye contact, and relaxation/focus exercises that help her to “get her brain back into gear” when she’s overloaded. We worked with a trainer, Sandi Pensinger of Living With Dogs, whose “Reactive Rover” classes gave Tajji safe exposures to other dogs. Over the course of the class and practice sessions, Tajji made slow improvement. Most of what happened was us learning how to read her (very subtle) signals of distress and to train ourselves in appropriate responses.

Tajji had learned that other dogs meant bad things, especially bad-scary things because she was in working harness and was not permitted to respond appropriately to aggressive behavior. In addition, she worked for 3 years with a fractured tooth, so she was in pain. Little dogs became firmly associated with pain, being vulnerable, and doubtless her owner being angry with her. We had our work cut out for use to undo that association and teach her that she was safe with us.

Our first goal was for her to be able to look at another dog at a distance, without barking or lunging. We had lots of practice in Sandi’s class, in a controlled environment, a soccer field where the other dog could be waaaay far and with visual blinds. We didn’t do many neighborhood walks because there are lots of dogs, both being walked and behind fences, and many places where it isn’t easy to “Get Out of Dodge.” We did find a place to go hiking with her, a private property where we had permission to do so with her on leash.

Eventually, the practice sessions ended. Tajji had had a number of successes, meaning looking at a small dog at decreasing distances. We began to think, though, that especially since she is elderly and doesn’t need a lot of exercise, we might confine her to the yard (1/3 acre, fenced) and our hiking place. But as time went on, we decided to try neighborhood walks again, choosing early morning hours. Some of these outings were uneventful, and that gave us hope.

Tajji clearly loves the opportunity to smell lots of new things, something she never did while working. She used to have a game of “refusing the harness” – we use a soft front-clip harness – romping and evading us for some time before allowing us to put it on her. These romps got shorter and shorter, until she would see the harness and run to the back door, tail wagging. This happened even after walks when we had “near encounters” with other dogs. All this time, we kept practicing the desensitization and relaxation skills.

A couple of things happened, including seeing a dog at the end of the block and turning briskly around or seeing a miniature horse being walked or encountering joggers. One was that a small dog near the corner got loose and rushed at Tajji. Dave, who was walking her, dropped her leash because being restrained makes any dog much more reactive. The dog raced up to Tajji, barking furiously, they tussled, she rolled the dog on its back, the dog ran away, and she came back to Dave, looking immensely pleased with herself. This incident – in which she was able to handle the stressful situation, and with excellent bite inhibition – seemed to give her more confidence.

Another thing was a series of calm visual encounters at long distances in which Tajji looked where we pointed (“Look at that!”) while being treated. Or a dog in a yard would rush the fence, barking, Tajji would react, we would “Get Out of Dodge” and then calm down. The distance we’d have to run got shorter, so that Tajji would be doing her focus exercises, eyes on me, while the other dog was still barking. Finally, we’ve had several occasions of being able to look calmly at a small dog, then look to me or Dave for a reward. In other words, we have been able to replace one response with another, desired one. The new scheme is Scary Dog -> look at Mom –> “Yes!” + treat.

This progress – and it is progress, not perfection – took time. Lots and lots of time. Lots and lots of repetitions. In fact, way longer and way more than seemed at all reasonable. We were ready to give up and just keep her beside us, where she prefers to be. But in her slow doggie fashion. Tajji was unlearning and relearning. Just the way dogs work better with occasional rewards, we humans need a hint now and again that our efforts are paying off. Now that we’ve had some evidence, we’re motivated to keep practicing.
Posted by Deborah J. Ross at 1:00 AM