Gifts of Darkover: Behind the Stories 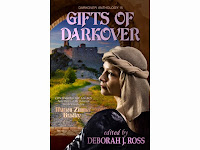 Writers find inspiration in many places: an image, a line of dialog, a character, a question, or the burning desire to know more. Here, in a fascinating peek into the imaginations of talented writers, some of the contributors to Gifts of Darkover share the origins of their stories. (This material appeared previously in individual interviews.) Available in trade paperback and ebook editions at Amazon, Barnes & Noble and other venues.

Jane Bigelow (“Healing Pain”): What happens when someone wants the best of both worlds, not just for themselves, but for their people? Taniquel’s father might have lived if the people around him had been able to combine Terran and Darkovan medical knowledge instead of each fearing and discounting the other’s resources. Taniquel also must deal with a question that transcends cultures: How do you rebel effectively against people who genuinely, but mistakenly, believe that they have your best interests at heart? People whom you respect, like, and even love?

Barb Caffrey (“A Problem of Punishment”): How did Fiona's parents meet? What was her father Dominic, who I already knew had been a judge before her, really like? And what had made Gorsali fall in love with him, and he with her? A romantic story of a smart man and an accomplished woman against the background of the Hellers appealed to me, especially since they fell in love prior to the Terranan returning to Darkover and didn't have many role models that would've helped them out. Now, as to why I felt Dominic, a judge, could fall in love with a Renunciate? Dominic has seen it all in his courtroom, and knows how to size up people quickly. Because of that, he has fewer prejudices in certain respects than others, and he has far more respect for the charter of the Renunciates than do most other men because he has far more respect for the legal system. Because of that, I felt he could see her as an equal partner in time...and that way, love could potentially grow (or at least a strong attraction).

Margaret L. Carter (“Hidden Gifts”): The guidelines for Darkover stories often mention “unusual use of laran.” I wanted to do something with one of the most unusual laran phenomena, teleportation, which (I think) is shown in the novels only in the context of matrix work. What experience might make a person unaware of the extent of her power desperate enough to perform such an act on her own? For a protagonist, I chose one of my favorite character types, the “Ugly Duckling” who discovers her “swan” traits only when pushed to her limits. In a way, this story echoes my first Darkover tale, “Her Own Blood” (in Free Amazons Of Darkover), which also features a nedestra heroine discovering her laran.

Rosemary Edghill ("Learning To Breathe Snow," written with frequent collaborator Rebecca Fox):  This was our second story written with the background we came up with for "Second Contact".  Following canon, the Terrans have moved the Terran Legation from Caer Donn to Thendara, and the culture-clash continues. One of the fun things for us as writers is that Marion Zimmer Bradley's canon isn't consistent.  In the stories she wrote first, it's the Terran Empire.  Later, she calls it the Terran Federation.  So of course we wondered: what if both names are true?  Does the Empire transition to a Federation during the period of Recontact?  If so, why?  With that question in mind, we set up the Terran Empire as something that needed to be toppled (though not by Darkover of course) and gave it an Evil Agenda.  Though of course, as a huge bureaucracy, the Terran Empire is neither quick nor efficient.  Nor even, in many ways, entirely in agreement with itself.
Leslie Fish (“Compensation”): I got to considering the effect of literacy on the mind, how it leads to precise, logical, and critical thinking.  I recalled that most Darkovans, at least before the Terran Re-Contact, were illiterate;  most of their record-keeping was done in the Towers, by psychic recordings.  How, I wondered, would that difference effect the thought-patterns of Darkovan culture?

Deborah Millitello (“Green Is the Color of Her Eyes So Blue”): I especially liked the newest book, The Children of Kings, which started me wondering why the Dry Towners didn’t have the psychic power called laran.  What if one of them did have laran?  What if a Dry Towner had laran because she was different from everyone else? That’s when I thought about my granddaughter Danielle.  She, her brother and sister, mother, aunt, and cousin all have a genetic condition called ectodermal dysplasia.  They have no sweat glands so they can’t tolerate heat.  Their skin is extremely delicate, often cracking and raw on hands and feet.  Hair is brittle and breaks or falls out.  Fingernails and teeth are often deformed. So what if a Dry Towner had a genetic condition like my granddaughter that let her use laran with the help of a special crystal, similar to the starstone?  What could she use it for?  Two things would be important in a desert land – water and food.  I chose quickly growing food as her ability, and she uses it to feed the poorest people in the Dry Town capital.

Ty Nolan (“Climbing to the Moons”): I have been intrigued in the more “ancient” history of Darkover, before they are “re-discovered” and before the society had become as organized as it eventually did. “Climbing to the Moons” is set in more “modern” times because I wanted to have an “outsider” who had served in the military on other planets be challenged by the lack of technical support he would be accustomed to using, but that would be unavailable on Darkover. I also wanted a very strong heroine and researched the history to find a family that would be more likely to allow a woman in a major leadership role. This tied in to her hiring the main male character because in looking at his record, he had served under female superior officers, so he wouldn’t confront her, based on her gender. Of course, one of my favorite parts of getting to play in the Darkover Universe is getting to invent some totally new concepts. As I mentioned, I was always curious about what life was like in the “really old days” when it was always a sort of Game of Thrones in-fighting between petty chiefdoms. If you don’t have particularly useful technology, how do you construct a decent war machine? Then I remembered Hannibal crossing the Alps with elephants and thought, “Wow—imagine being under attack by an extremely intelligent herd of elephants—and to make them even more scary—what if I make them omnivores so they can bite the heads off an enemy?” I did a lot of research on elephants and explained they had been genetically bred with a now-extinct animal that was the largest mammal on the planet, so I didn’t have to worry about a poor African elephant freezing to death on Darkover.

Diana L. Paxson (“Blood-kin”): In "Evanda's Mirror" (in Stars of Darkover) I asked what might happen if a transwoman an tried to join the Free Amazons. It seemed like the kind of issue Marion might have tackled if she were writing today. In "Blood-kin" the characters from the first story face the consequences of their actions, as Thendara suffers an Ebola-like plague.

Marella Sands (“Stonefell Gift”): While I liked them, the later time periods didn’t quite capture my imagination as much as the earlier Hundred Kingdoms era. But what I really wanted to read about was even earlier, during the Ages of Chaos. What were the breeding programs? What disasters led them to be abandoned? What were clingfire and bonedust? Who founded the Towers? Stormqueen! assuaged my curiosity a bit, but I wanted more. So when the invitation came to write a story for Gifts of Darkover, I knew instantly what time period I wanted to write about, and what the subject would be. “Stonefell Gift” takes place as the Comyn are starting to exert control and eliminate the breeding programs. Three of them come to Stonefell and discover how tragic the consequences of lethal genes can be.