The Daughter of Doctor Moreau, by Silvia Moreno-Garcia (Ballantine) 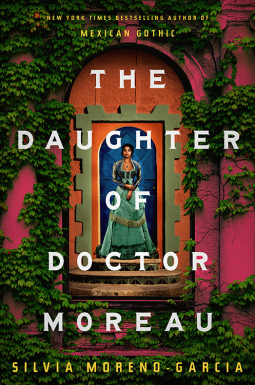 My introduction to the Mexican-centered fantasy of Silvia Moreno-Garcia was her re-telling of the Cinderella story, Gods of Jade and Shadow. Now she offers a fresh interpretation of H. G. Wells’s classic novel, The Island of Doctor Moreau. Instead of retreating to a hidden island to perform his experiments, this Dr. Moreau seeks the relative solitude of the Yucatán jungles, on an estate owned by a wealthy man in search of cheap, malleable plantation laborers. Under the pretense of developing such workers, Dr. Moreau creates human-animal hybrids from various animals. They are, alas, less than functional, with rapid aging, joint problems, and other issues. Only his beautiful, meek, and secretly rebellious daughter, Carlota, is perfectly human. Dr. Moreau needs a majordomo to run the estate and care for the infirm hybrids, so he hires Montgomery Laughton, a drifter heavily in debt and drowning a broken marriage in drink. Isolated and surrounded by lush forest and fascinating creatures, Montgomery begins to slowly form a friendship with Carlota and to heal.

When the landowner’s charming and egotistical son arrives at the estate, he is instantly smitten with Carlota, thereby setting into motion a cataclysmic chain of events.

Like other of Moreno-Garcia’s adventures, The Daughter of Doctor Moreau is strongly character-driven. Maturation and healing are the twin lenses that focus the action, which begins slowly in the near-static serenity of the estate and builds to a breathless climax. At first, I found Carlota childish, especially her constant verbal sparring with her two closest hybrid friends. Her flirtation with the landowner’s son struck me as dangerously naïve. As the story went on, however, I noticed the parallels between her increasing understanding of the world at large and of herself. Her capacity for acceptance—of her friends, of her father, of Montgomery with his tortured past, and of her own true nature—emerges as the moral and emotional center of the book.