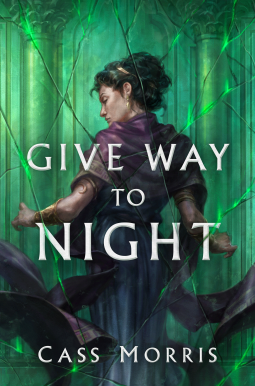 Give Way to Night, by Cass Morris (DAW)

Rome with magic, how cool is that? In this second volume of “The Aven Cycle,” Aven (aka Rome) is beset by enemies both within and without. Iberian tribes are wielding blood magic against Avenian-held territory, and Sempronius Tarren, our hero from the first volume, has been dispatched to lift a siege. Meanwhile at home, the Discordian magicians plot the city’s ruin through the ascendency of chaos. Latona, along with Sempronius’s prickly sister, Vibia, must discover who’s behind the attacks and stop their dastardly plots.

As with the first book, this is a long, intricately detailed story involving a huge cast of characters (and the author has thoughtfully provided a list, arranged by nationality and family affiliation). The pace varies from dramatic battle scenes to quiet domestic affairs. The threads of plot, character development, relationship, magic, and culture clash are so skillfully handled that each individual scene adds another layer to the tapestry. I especially liked the way the love story between Latona and Sempronius unfolded even though they were many miles apart and each growing in their own way. The descriptions of battle tactics, especially Roman discipline against wild magic, were both vivid and insightful (yep, there’s a reason Rome conquered most of Western Europe). Characters discover clues about the plot underlying the encroaching chaos in much the same way people do in real life, slowly putting together a pattern while desperately beating back the most dangerous manifestations.

Magic in this world comes in different flavors that reflect the distinct cultures. I explored this aspect of world-building in my “Seven-Petaled Shield” trilogy where I contrasted the polytheistic, highly structured magic of my version of Rome with scripture-based, story-based magic of ancient Judea, and both with the expansive nature-based magic of my steppe horse nomads. Morris pits the magic of her version of Rome, with temples and deities, against the blood-fueled magic of the Iberian tribes, with great success.

I strongly suggest that the reader begin at the beginning of this long “cycle” (Give Way to Night is only the second installment and there’s more to come). Although Morris provides plenty of references to what has come before, there’s simply too much backstory and previous character development for most of us to jump easily into the middle. And the world and its characters are so appealing, you won’t want to miss out on how it all started!