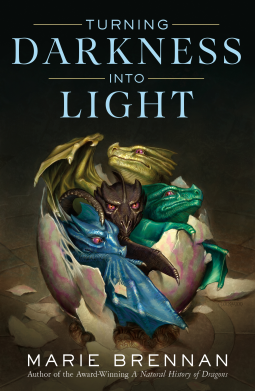 If you, like me, fell in love with Lady Trent and her dragons (A Natural History of Dragons and its sequels) you will find this latest adventure a delight. Decades later, Lady Trent’s granddaughter, Audrey Camherst, is struggling to further her scholarly career after an unscrupulous suitor stole her original observations and published them himself. Now she and her Draconean colleague, Kudshayn, venture to Lord Gleinheigh’s remote estate to examine newly excavated tablets that promise to shed new light on the history of the Draconean people and their relationship with humans. It’s a tense time politically, for the Draconeans have been restricted to a single regional Sanctuary and a vote is coming up that may allow them freedom to settle where they wish. Audrey discovers an unexpected ally in Lord Gleinheigh’s niece, and perhaps a second chance with her former suitor.

Told as a sequence of letters, news stories, and diary entries, the story swept me up with wonderfully rich, sometimes unpredictable characters, the joys of archaeology (and of linguistics!), and the slow, exorable rise in danger until the thrilling climax.