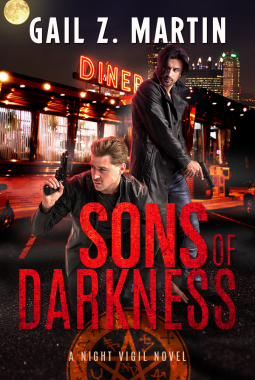 I met Gail Z. Martin through her #HoldOnToTheLight campaign and was curious to see what kind of fiction she writes (there’s a lot of it, which is a good thing because she’s very good!) I didn’t know that Sons of Darkness is tied into several of her other series, but no prior experience was necessary to enjoy this story.

Martin is highly experienced in her genre and handles pacing, tension, character development, and a host of new twists on old horror themes with deceptive ease that makes for a smooth, fast-paced reading experience.

The book revolves around two men who are both mirrors of one another and distinct individuals. Travis Dominick, ex-priest, psychic medium, and former member of a secret Vatican order of demon hunters, encounters Brent Lawson, vet, ex-cop, ex-FBI agent, former member of a supernatural-black-ops, and surviving twin whose ghost brother hangs around, trying to make contact. Travis’s first thought about Brent as he rescues him from a psi-vampire is: There’s a newbie out there who thinks he’s Van Helsing.

Soon, however, the two overcome their animosity to work together as supernatural invasions mount and a pattern emerges:  every fifty years, a hell gate opens and increasingly terrible disasters feed the spirit dwelling there, climaxing in a horrific blood bath.

One of the challenges of writing a stand-alone book within a series, or linked to other series, is the balance between giving the new reader all the necessary background, developing the characters well enough, and yet not boring readers who are already familiar with the cast and setting. Martin does a fine job here, and although not every secondary character came fully alive for me, I always knew enough about them each time they were mentioned so as to not be confused. As I mentioned earlier, the handling of exposition, action, and pacing was top-notch, except for a couple of minor bobbles late in the book when a small but essential piece of action happened (unnecessarily, I thought) off-stage, but these flaws were minor compared to the overall pleasure of the story.

Now that I’m hooked on Travis, Brent, and the crew, I’ll be looking to follow their previous and future adventures with anticipation.

The usual disclaimer: I received a review copy of this book, but no one bribed me to say anything in particular about it, one way or the other.