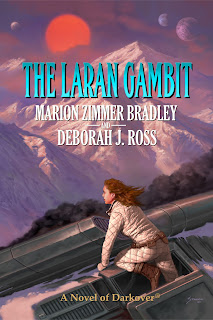 When is The Laran Gambit coming out?
The Laran Gambit came out in November, 2022. Jewels of Darkover (anthology) is scheduled for 2023 and Arilinn (novel) for 2024.
For the latest news and sneak peeks, plus fun stuff, recipes, and cute cat pics, subscribe to my newsletter.

What authors influence your writing?

The list is very long! Some of my favorite contemporary authors include Barbara Hambly, Mary Robinette Kowal, Louise Marley (Louisa Morgan), Tim Pratt, Lois McMaster Bujold, Carol Berg, Jennifer Roberson, Chaz Brenchley, Judith Tarr, Vonda N. McIntyre, Ursula K. Le Guin, Charles Stross, Diana Wynne Jones, and Tanith Lee. I love authors who give me a new way of thinking about story or language. Once it was possible to keep up with who was writing what, but the field is so large now, I’ve given up trying. I rely on the advice of friends whose taste I trust. It’s hilarious when a friend hates what I love and vice-versa, so I go for whatever they pan. When I go to a science fiction convention, I try to buy at least one book by an author I have just met but have not yet read.

How did you get started writing fantasy and science fiction?

I began writing stories around fourth grade but did not do so seriously until the late 1970s, when I made my first professional sale to the debut volume of Sword & Sorceress. For the next decade or so, when my children were small, every year I wrote one or two short stories every year, which Marion bought for her anthologies or fantasy magazine, and one unpublishable novel. But slowly my writing craft improved and I sought out different editors and markets. Some of my stories garnered critical acclaim and award nominations. Eventually, in no small part thanks to a rigorous writer's critique group, I sold a science fiction novel to DAW -- Jaydium -- and then another, Northlight. Eventually, my novel-length work shifted more to fantasy, although I still write science fiction shorter work.

How did you get to write Darkover novels?

I am frequently asked how I came to work with Marion Zimmer Bradley and to continue her Darkover series after her death. Senior author-junior author dual-bylines are not unusual these days, but each partnership has its own story. In this case, the answer centers around our long-established professional relationship.

To begin with, I met Marion by writing her a letter. This was back in 1980 and I had no idea fandom existed, but I felt so moved by her work that I wanted to let her know. Marion wrote back, three pages of single-spaced typewriting. We began a correspondence, and I must confess to a certain giddiness that my favorite author had taken the care to write to me.

Marion had read my Darkover fiction for the fanzine she edited for Friends of Darkover, so when she began work on the first Sword & Sorceress, she invited me to send her a story for consideration. She bought that story and many others over the years, although she occasionally sent back stories with requests for revision.

Toward the end of her life, Marion suffered a series of strokes, which made it difficult for her to concentrate on novel-length stories. I was one of the writers Marion considered because she had watched me develop from a novice to an established professional.

We began work together as we had begun our relationship, first in correspondence, then in person. We'd settled on a time period and general story arc when I visited her for the last time. When I arrived at her home, she had been resting, on oxygen, but insisted on sitting up to talk. I knew she had been very ill, but seeing her made her condition so much more vivid for me. One of my best memories of her was watching her "come alive" as we discussed character and hatched plot points. Her eyes "glowed as if lit from within," to use one of her favorite descriptions, and energy suffused her whole being. I asked question after question and then sat back as she spun out answers. It was as if she had opened a window into her imagination and invited me to peek inside. We never got a second visit. She died a month later.

Any advice for writers just starting out?

Writing is both craft and art. You already have the dream. Now you have to learn the craft. As exciting as the prospect of publication is, if you’re in this for the long haul, be patient. It takes time and work to achieve excellence. There are so many aspects of success you’re powerless over, but the quality of your work is one you do have control over.