Creating Characters in a Shared World 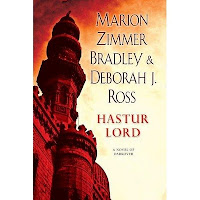 One of the most challenging aspects of continuing Marion Zimmer Bradley’s Darkover series--or any world invented by another author, for that matter--has been the portrayal of characters that are not my own. Most were created by Marion herself, but some came from one or another of the writers she had worked with before me. A case in point is Marguerida Alton, who began as a small child in Marion’s books but was brought to adult life, much to the delight of many readers, in the Darkover novels written by Adrienne Martine-Barnes.
To begin with, writing someone else’s characters is a no-win situation. No matter how carefully you, the new writer, study what has been done before, pouring through notes and out-takes and letters as well as published material, you’re going to get something wrong. Or perhaps not wrong but different. This is primarily because we are all individuals. Each creative vision, each way of working with characters, is unique. Added to that are the variations inherent in each story.

A novel is like a character unto itself, and plot and theme interact with character. Most writers have had the experience of realizing that a character is wrong for this particular story (or vice versa) or of a secondary character who keeps trying to run away with the story and has to be bribed back into submission with promises of a future story all her own. For example, the character of Regis Hastur evolved over decades and through a number of novels. This was partly because Marion’s conception of Darkover and the people on it had matured, but also because each story required a different view, even of the same character.

When I sat down to write about Regis Hastur in Hastur Lord, I asked myself which version of Regis and which aspects of Regis were necessary for the story at hand. Which incarnation would bring the right anguish, the passion, the integrity, the insecurity, and the instinctive gift for leadership?

To do this, I drew not only on the published novels in which Regis played a role, but on Marion's short stories, notes and personal communications. I was working from a partial manuscript that Marion wrote in the final year of her life, which furnished the skeleton of the plotline, as well as some new characters.
My editor at DAW Books is Betsy Wollheim. Betsy not only edited Marion herself, but her father, Don Wollheim, was Marion’s editor at Ace, so the father-daughter editorial team has been part of the unfolding story Darkover from the beginning. Betsy was able to give me not only specific information about the history of Regis and Danilo, but an editor's perspective on Darkover. Ann Sharp, the Trustee of the Marion Zimmer Bradley Literary Trust, and Marion’s secretary, Elisabeth Waters, also furnished invaluable insights into how Marion saw these and other characters. Finally, the manuscript was reviewed and approved not only by the Trust but by DAW’s own in-house Darkover maven, Marsha Jones.

Once a character-written-by-someone-else has made it into a published story, however, a sort of feeding frenzy begins. As uncomfortable as it sometimes is to be on the receiving end of criticisms from readers who are furious that their favorite characters are being misinterpreted, I applaud their passion and loyalty. I believe that we fall in love with characters who reflect and inform the deepest stirrings of our own hearts, no matter who originally wrote them.
A version of this blog appeared in 2011.
Posted by Deborah J. Ross at 1:00 AM